Between the WCAC, the DCIAA, and the excellent public schools in Maryland, Northern Virginia often doesn't get the credit it deserves. We talk to Lake Braddock coach Jim Poythress about why that may be.

Share All sharing options for: Varsity News: How Northern Virginia Stacks Up As Football Hot Bed

The DMV is an interesting area for sports. Because the District of Columbia is so small, it can't really be considered its own sports market on the high school level. As a result, newspapers that cover high school athletics have to cover a good portion of Maryland and Virginia as well.

Some danger lies in comparing the various teams from these areas. They don't really play each other, save for the rare nonconference showcase game, so it's hard to really evaluate the relative competitiveness of the teams and leagues across the three regions that we cover here. As a result, biases can be formed that become hard to break, and some regions tend to get more attention than others.

The DCIAA is the focus of football in the area. The WCAC has maybe the best teams, and that includes some teams from Maryland; not to mention the excellent public schools from that state as well. But in that shuffle, Northern Virginia tends to get a little lost. 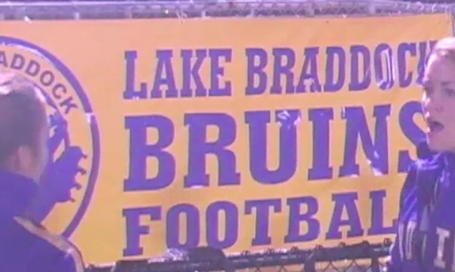 "I think the teams in northern Virginia," said Lake Braddock coach Jim Poythress in a Varsity News exclusive interview, "most college coaches that you talk to, will tell you that the teams in Northern Virginia are probably the best in those jurisdictions. There are teams in Maryland, you know the top two, three, four, five teams that can play with anybody, but overall, top to bottom, I don't know that the northern region usually gets its fair shake."

Coach Poythress also pointed out that traditionally, public schools in Northern Virginia have been very successful against public schools in D.C. and Maryland. The games against the private schools in those areas have been a little more competitive, but those schools of course have the luxury of recruiting and scholarships to offer.

So why doesn't Northern Virginia get the credit it deserves?

"You gotta sell papers," Poythress said, "I understand that, but I think at the same time if you look at the history of competition between those small schools, Northern Virginia has pretty much dominated D.C.." 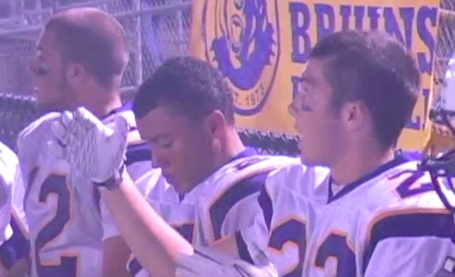 It's true, the public schools in D.C. and certainly the private schools, are a little bit more of a draw than the public schools from Northern Virginia. But that shouldn't obscure the fact that they are playing some damn good football down there.

Now you're going to look down and see that most of the stories below are about D.C. schools. I know, I know. But we can't start to be biased toward Northern Virginia either, and the teams I chose to write about this earned there spots in Varsity News with their performances, not a bias I have toward the areas they come from. We keep it balanced around here.

Dunbar is one of the most recognizable schools in the area. It always seem to be playing in the Turkey Bowl, and its list of alumni currently playing in the NFL is right up there with any high school in the country. The Poets missed out on the Turkey Bowl last year, and they've made it their mission this season to re-gain their rightful position among the hierarchy of public schools in the area.

Ballou took Dunbar's place in the Turkey Bowl last season, and it wanted to spend this season proving to every one of their critics, and to some degree themselves, that it belonged in that game last year. When Ballou faced Dunbar on Friday, with their season and reputation on the line, it was Darren Holbrook who dominated the game.

Holbrook rushed 23 times for 190 yards, and scored two of Ballou's three touchdowns in an 18-7 win. But any running back (obviously it takes a lot of talent, just bear with me for a second, trying to make a point here) can run for prolific numbers behind an offensive line as imposing as Ballou's; it was Holbrook's contributions on both side of the ball that earned him the Performance of the Week award.

With just about six minutes left in the game, and Dunbar threatening to cut the Ballou lead to a very manageable four points, it was Holbrook who came up with a game saving interception in the end zone as he was matched up with a receiver that was no less than six inches taller than him.

For his ability to play on both sides of the ball, particularly in a game with so much meaning, Darren Holbrook had the Performance of the Week.

The Ryder Cup is among my favorite sporting events. It combines two of my great loves; golf, and rooting passionately for the USA against any one, if not all, of the countries that make up the European continent. Part of me wishes that collegiate and professional football could just take the week off so that the Ryder Cup could get the attention it deserves. A fairly large part. Pretty close to most, in fact.

I'm not particularly familiar with the junior Ryder Cup, but if it's anything like its parent event, then being named to its roster is just about the biggest honor a golfer can achieve. Denny McCarthy, a senior at Georgetwon Prep, was selected to the USA's team in the junior event, and was part of the reason they were able to emerge with a victory.

McCarthy only went 1-2, but his victory came on the first day of competition when the U.S. was able to build a lead that would prove to be insurmountable.

McCarthy and the rest of the junior national team flew to Celtic Manor on Wednesday to meet the senior team, and observe some of the Ryder Cup competition.  Rarely am I truly jealous of the athletes I write about, but this is absolutely one of those times.

To say that Archbishop Carroll High School hasn't been among the best teams in the WCAC would be putting it kindly. The truth is, over the last handful of years, they've been closer to a train wreck than a football team. In the last five seasons, they've compiled an overall record of 7-42. Yikes.

But this year, there's something different about the Lions; and a lot of that has to do with their new quarterback, Jarid Brown. Brown spent the first two years of his career at Riverdale Baptist, before transferring to Carroll this past summer. In their latest triumph, a 13-6 win in their conference opener vs. St. John's, Brown rushed for 123 yards and both of Carroll's touchdowns.

After that game, St. John's disputed Brown's eligibility, citing a rule that forces athletes to sit out a year after transferring to a new school. But Brown was granted an expedited transfer because he spent his entire career with Riverdale on junior varsity. There is still some dispute about whether or not that is true, but as it stands, Brown is eligible to play, and leading Carroll to success they are unfamiliar with.

As of now, they stand at 4-0, which already matches their total victories from last three seasons combined. Is Carroll the best team in their conference? No. But they're playing much better than they have in the past, and they deserve their day in the sun. The sun being, of course, the reflective glow that comes off their computer screen when they find out they've been named the team of the week.

Osbourn and Osbourn Park had enough of a rivalry going, but the summer transfer of Dominique Terrell really turned it up a notch. Unfortunately, even though that move created a lot of buzz around this year's game, it also created a talent disparity that was too great for Osbourn Park to overcome.

As usual, Terrell was the main catalyst for Osbourn last week. He ran the ball 32 times for over 200 yards and three touchdowns, pacing the Eagles in a 27-14 win that was never really that close.

Games To Watch This Week:

It was awfully nice of Coach Poythress to lend some time for an interview in a week when he is preparing for one of his team's biggest games of the year. Later today, Lake Braddock will face Robinson in an early season match up of two of the best teams in Northern Virginia.

The story of tonight's game will be Lake Braddock receiver Matt Zanellato, who transferred to arch rival Lake Braddock before his final season to an offense that would better highlight his abilities. Leading up to the game this week, Robinson fans have littered Zanellato's Facebook page with a lot of things I don't think I'm legally allowed to recreate here. It's been ugly. The game is at Lake Braddock, but Robinson is only about four miles away so the atmosphere should still be something to see.

I'm going to be at this game, so I'll have a full recap for you next week.