This week at Varsity News, we talk to Michael Dola. He's the best kicker in the D.C. area and the reluctant co-star of football blooper that has gone viral.

Michael Dola is the placekicker for Yorktown High School in Arlington, and he's known for his touchbacks. He's got a strong leg and usually a forces opponent to start their drives at the 20-yard line. He's a field position generator.

A few weeks ago in a game against Madison Dola hit one just right, "Right when the ball came off my foot I knew I struck it well," he told me. "I knew that thing was just gonna fly."

And he was right. The kickoff traveled almost all the way out the back of the end zone. And it would have just gone down as one of his longer kickoffs if it weren't for what happened to the returner after he caught it.

You may have seen this video before. It's been on ESPN and has over 700,000 hits on Youtube.

I attended a recent Yorktown practice to talk to Michael about being an Internet sensation for all the wrong reasons. All I had to say was, "Hey, wer -" before Dola knew what I wanted to talk to him about.

He started to tell the story for what must have been the thousandth time in the past few weeks. You have to admit for a story about a touchback in a high school football game, it certainly has a hell of a twist. "It caught me off guard," Dola said about seeing Andy McGuire of Madison run into the uprights when he received the kick.

But at the time Dola simply wrote it off, "I heard a big ohhh from the crowd, one of those types of things," he said. "But that's really all I thought of it. I just turned around, grabbed my tee and jogged off the field."

It was clear that Dola wasn't as big a fan of the video as I had anticipated, "It was funny, but I didn't think it was that funny." I think that may be due to Dola wanting be known for his leg, not his partial involvement in a blooper, and I can understand that. "Obviously I got a lot of publicity from that," he said, "but it's not exactly what I envisioned."

And he wants make sure that McGuire wasn't going to be remembered for one out-of-context play either. "I think a lot of kids forget this but the kid who ran into the post was a tremendous athlete that just got unlucky," he said. "He was a great sport about it. He got up, brushed off his shoulder and that was it."

But on the other hand the video has made Dola an absolute ROCKSTAR on campus. He told me that he was in a hurry last Thursday and his classmates allowed to him to cut in line to buy tickets for the homecoming dance a few days after the play aired ...

Ok, so maybe not a rockstar, but he probably saved himself a good five minutes there, which is something. Membership certainly has its perks, kind of.

If Michael Dola had his way he would be known for the kickoff that forced the returner to the back of the end zone rather than what happened after he kicked it. But he also knows it is the event he is most known for and he has to live with that. Hopefully he is able to get the most out of it.

Last Friday I attended my first game between DeMatha and Good Counsel. If you've been reading Varsity News, then you know how I feel about these two schools. I think they are the best teams in the area terms of long-term consistent success, and I believe they share one of, if not the most important rivalry in the area. It's one of the dates you circle as soon as the calendar comes out.

So I was excited when I was assigned that game last weekend. I get to stand on the sidelines for the games I attend, and this is one of the few times I considered that access a real privilege.

Midway through the first quarter I realized that this wasn't a normal game. I was standing on the sideline next to a man of the cloth who was screaming over and over, "YOU HAVE TO HIT SOMEBODY!!" as the DeMatha kickoff unit stormed down the field. It was unexpected, but it reminded me what was at stake between these proud Catholic Schools.

I'd be lying if I told you that I wasn't a little disappointed with the atmosphere as a whole, though. When I arrived at Good Counsel and had to park nearly in the next town over, I was expecting a raucous crowd. The stands were full but the students were surprisingly quiet considering the circumstances.

But I'm going to give the fans the benefit of the doubt and give DeMatha all the credit for taking them out of the game early. Good Counsel is a team that likes to throw the ball, so when DeMatha came out and racked up 41 rushing attempts it put the Falcon fans right to sleep. And getting out to a 14-0 lead over the course of two minutes in the second quarter didn't hurt. 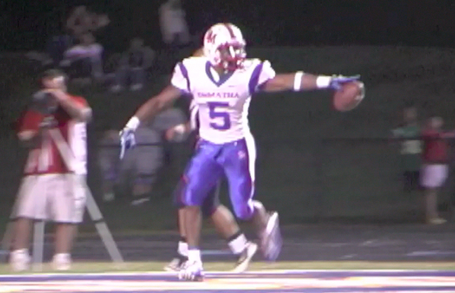 Jacob Siwicki is DeMatha's power back. He gets the bulk of the carries and had a great day against Good Counsel going for 127 yards on 24 carries. He was a battering ram all night long.

But for the performance of the week award, I'm going with the Stags' change of pace, Darien Harris. Siwicki was good for five yards a pop, but every time Harris touched the ball he had the chance to take it to the house.

Harris totaled 168 combined rushing and receiving yards on only 11 touches; the most important being a 71 yard touchdown reception in the third quarter that helped stave off a furious Good Counsel comeback attempt. A late field goal gave DeMatha the 31-28 win. 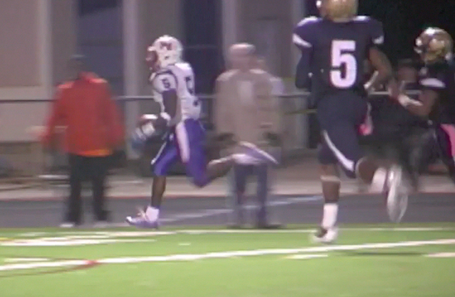 Even with all his offensive contributions, Harris might even be better on the other side of the ball. He'll be attending Michigan St. as a linebacker next fall.

After the game Harris told me how important this game was to their season and that it would give them confidence for when the two inevitably met again in the playoffs. It's hard not to be confident when you have Darien Harris on your side.

Even if a player has a great week, I have trouble labeling it a "good" performance if their team was unable to win the game. History is written by the winners so sometimes a great individual effort by a member of the losing team can be forgotten. But I don't want to let that happen.

Good Counsel happened to lose their game against DeMatha, but it wasn't for lack of effort from their most versatile offensive weapon, Stefon Diggs. One of Good Counsel's four touchdowns was scored on a long kickoff return; the other three were receiving touchdowns by Diggs. 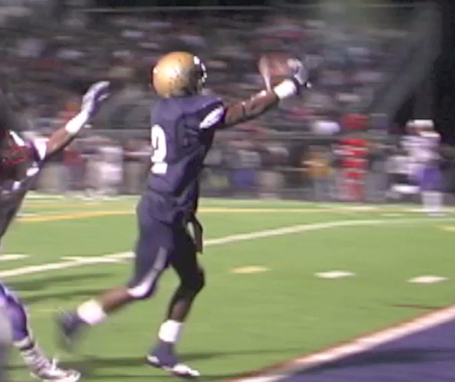 Diggs finished with 124 yards on seven receptions and added another 50 yards on the ground for good measure. But it didn't help them win the game so Diggs' individual achievements get lost in the shuffle. If Good Counsel had won, Diggs would have had the performance of the week. But I still felt it was necessary to acknowledge him even though is team lost. Luckily I have a more individually focused award to bestow.

Colonial Forge was the easy choice for Team of the Week, and it's not completely because of their success on the field. Sure, they're 6-0 and rank among the best teams in the area but it was the novelty of being able to bestow the team award in layers that really captured my attention.

See I could choose to give the award to the entire Colonial Forge team who just beat the pants off North Stafford 42-27; or I could just give it to the Frohnapfel Team sub section of the Eagles.

The Frohnapfel twins are two seniors that make up a big part of the Colonial Forge attack on both sides of the ball. Blake is the quarterback and Eric is a tight end/defensive lineman. On Friday the pair accounted for three touchdowns; a rush by Blake, and interception return by Eric, and a pass from one to the other.

I think I'll give the award to the whole Colonial Forge team, because I'm not usually one to pick favorites. But I think Team Frohnapfel deserves honorable mention.

Brenda Frese didn't have to travel very far from College Park to sign her latest major recruit. Brene Moseley was the leading scorer in the Washington area as a junior at Paint Branch, and she improve the Terps' backcourt immediately.

Even in College, Moseley should be faster then whoever has the misfortune of trying to guard her. She uses that speed to get to the rim at will, but she has no problem in relying on a deadly pull up jump shot if the lane gets bogged down.

Securing the best local talent is a great way to make sure your team stays successful. Moseley is a great get for the Terps.

These two teams were a big part of the reason why I ranked the Virginia AAA Concorde the best division in the area last week.

They're both 6-0 and they'll be playing for control of the division on Friday.