Share All sharing options for: Mike Green's Return A Major Boost For Capitals

WASHINGTON, D.C. -- Mike Green returned to the Washington Capitals lineup Saturday night against the Atlanta Thrashers at Verizon Center after missing the previous three games with an undisclosed upper-body injury. Green suffered the injury late in the third period against the New York Islanders on Oct. 13 and saw limited action Saturday as he was used only on the power play.

Though Green saw just 5:39 seconds of ice time, his impact on the game didn't go unnoticed. The anticipation of getting Green back was felt throughout the entire team before and after last Saturday's win.

"Oh, it was good," center Nicklas Backstrom said when asked what it was like having Green back on the power play. "He brings a lot to this team and he's good with the puck and he has a great shot. So, I can't wait until he's playing a full game."

The biggest difference Green makes for the Capitals is his power-play production. He has 28 power-play goals the last two seasons, and is the primary puck handler on the team, from bringing the puck up the ice to distributing it once in the offensive zone.

Much of this talk of the Capitals' early-season power play issues can be traced back to Green's absence. In the three games Green has been out, the Capitals went just 2 for 13 on the power play and noticeably lacked any flow, struggling at times just getting the puck into the offensive zone. This was especially true in the back-to-back losses to the Boston Bruins, as the Capitals failed to score in eight tries over the two games.

That lack of flow was not evident Saturday, though. The Capitals were able to keep the puck in the Thrashers zone for sustained periods of time and generated multiple scoring chances on their three power play opportunities.

Green did appear to score at goal at the 11:42 mark of the second period just one second after the Capitals power play had expired. The goal, however, was disallowed as it was determined Green kicked the puck into the Thrashers net.

"It was good [to have Green on the power play], but I would've liked to have had him more," coach Bruce Boudreau said, eluding to the Capitals only having three power play chances the entire game. "Even though we didn't score any goals, I thought we had constant pressure and our power play was more like what we are capable of playing."

Added Backstrom: "He's a great player on the point and he brings a lot of things to the team and we need him out there. He has a great shot and good vision. So, to have him out there it's comfortable for a lot of guys." 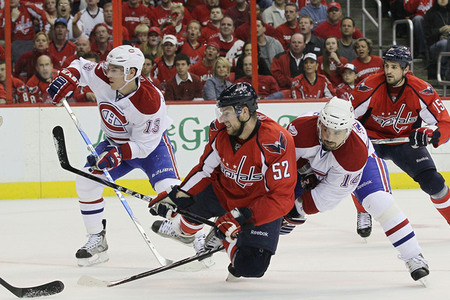 But it's not just on the power play where Green is missed. The Capitals have also missed Green's ability to create offense in five-on-five situation, scoring just five goals in the three games he was out.

"He's great at making that breakout pass and he's great at creating offense out there," fellow defenseman Karl Alzner said. "So, that's huge with our team, and I think once he gets back he's going to make a big difference."

Alzner also noted the comfort level that Green brings to the Capitals defensive core when he is in the lineup.

"Obviously he creates a tone of offense where as a lot of us are mainly guys that aren't known for offense," he said. "Of course [Carlson] can. Tom [Poti] is a two way guy, so it's nice when you have that one real offensive threat that you know every time he's out there he's got a good chance to score."

Having Green back won't fix all of Washington's holes, but for those panicking over the team's slow start, keep in mind that there are some injuries even the best regular-season teams cannot overcome. Green is clearly one guy the Capitals cannot afford to lose. 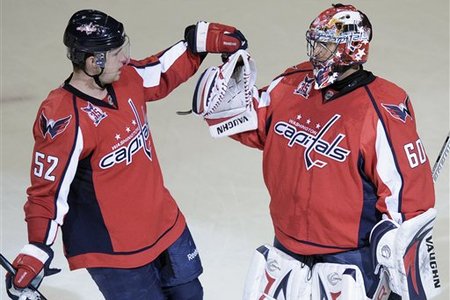