Varsity News: Which Region Is Playing The Best Football In The D.C. Area?

This week, we go division by division across the DMV to break down which region is playing the best football.

Share All sharing options for: Varsity News: Which Region Is Playing The Best Football In The D.C. Area?

Last week, we talked to Lake Braddock coach Jim Poythress about where the Northern Virginia region ranks in terms of football quality in the area. I had no reason to doubt what Coach Poythress said, but I really wanted to know for sure who was playing the best Football in the DMV. So we're going to do some rankings to see if we can try to figure out where that is.

I'm not ranking teams, because that can sometimes be a false indicator of quality. I'm going to rank the best divisions and conferences in the area. That way you can see quality depth in a given region, not just a few good teams.

The top spot on this list was the easiest one to fill. Of its six schools, five have a legitimate claim to be ranked among the top 25 teams in the area. This is the SEC of local high school athletics. Centreville, Chantilly and Oakton are all undefeated. Robinson is just coming off a huge win that we'll talk about later, and Westfield is probably the second-best 3-2 team you can find.

The reason the WCAC made the list this highly is because of the success that Gonzaga and Carroll are having this year. Good Counsel and Dematha (the best 3-2 team) are still the big names, but neither has looked as good as preseason expectations. Gonzaga is 4-1 and looks great under new coach Aaron Brady. Carroll, traditionally the worst team in the conference, is 5-0.

I hesitate adding the Montgomery because it has two teams that don't have any wins. But most divisions have a team like that, and this one is simply large enough to have two. The talent at the top is what saves it though. Damascus, Seneca Valley and Quince Orchard are the big names, and are a combined 13-2.

Great depth at the top with CH Flowers, Suitland and Eleanor Roosevelt. The bottom teams being so beat up so much is just a factor of playing all of their games in conference.

Only one undefeated team in Colonial Forge, but four teams are undefeated through two games of conference play so far this year.

Unfortunately, I'm not really sure what I proved here. The list is pretty mixed up, and there doesn't appear to be one clear winner, which basically confirms what we already suspected. Though the rankings probably fluctuate year in year out, there is good football being played everywhere in the DMV.

-I previewed the game between Robinson and Lake Braddock last week because I was told that it would be one of the crazier high school games I would ever attend. I had my doubts, so I looked at the backstories that were going to make this game so interesting. 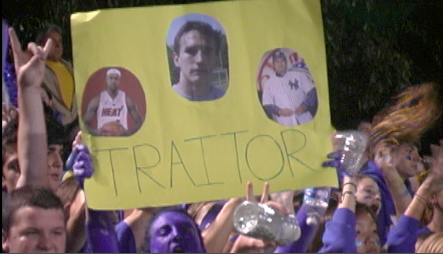 I got to the game on Friday about an hour early but by the time I had arrived, all the parking spaces at the school were already taken, as were those lining the school's street. I had to park just under a mile away in a residential neighborhood, and I got the last available spot in that cul-de-sac.

I made my way up to the game, carefully leaving behind me a string of bread crumbs so I could find my way back to the car at the end of the night. When I got there, I saw that even 35 minutes before game time, both sets of bleachers were nearly full and standing. The student sections had been there for an hour or so watching warm ups and yelling at one another.

The game itself featured two completely opposite teams. Lake Braddock has one of the highest scoring offenses in the area behind All-Met quarterback Michael Nebrich. They run a no huddle spread offense and sling the ball all over the field. Robinson is a very strong defensive team that relies on a relentless ground game featuring Jared Velasquez. The two teams had relatively equal talent; it was going to come down to which team forced the other to play out of their comfort zone.  You've read the headline, so you already know that team was Robinson. 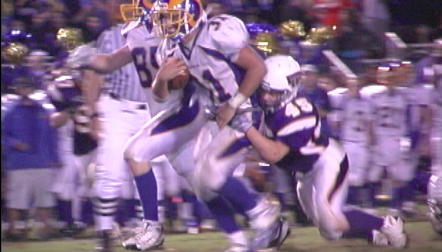 You can tell by the 10-7 final score that this wasn't the type of game Lake Braddock wants to be playing. They prefer those big friendly numbers in the 30's and 40's. But the Robinson defense stepped up and shut down the previously unsolvable Lake Braddock offense.

Nebrich had just 196 yards on less than 50 percent completions with two interceptions. Lake Braddock's only points did come on a 40 yard scramble by Nebrich, but it was the only time he really did any damage with his legs.

But the important matchup they won was against Zanellato. The receiver was limited to one big play, and dropped a few passes that he was capable of catching. Overall, he didn't have much of an impact on the game. And the Robinson fans who were in attendance were pretty happy about that particular aspect of it. How happy? Watch this video of them engulfing a Robinson player while I tried to interview with him after the game.

Robinson's defensive effort helped keep the home crowd out of the equation for much of the second half and forced a couple turnovers that helped the Rams take over and eventually win the game.

After I followed the bread trail back to my car, it took me an hour to get a mile on my way home because Robinson fans kept running out into the street and harassing Lake Braddock cars. Which was most of them. Robinson came into a hostel environment, and won, in the craziest high school environment I have ever attended.

I like to give the Player of the Week award out as almost a lifetime (or at least season-long) achievement award. I consider guys who have put together an excellent season so far and are continuing to build on that reputation.

The game Gongbay put together on Friday would be a career day for most running backs, but with the way Gogbay has been running this year, it kind of just blends in.

Against Richard Montgomery, Gongbay ran the ball 266 times for 206 yards and three touchdowns. It was the fourth time in five games this season that Gongbay eclipsed the 200 yard mark (he had the nerve to only rush for 192 against Northwood).

In five games, Gongbay is averaging 220 yards and three and a half touchdowns per contest. He is the area's leading rusher, 155 yards (or what would qualify as one good game) ahead of the guy in second.

Since his performances go under the radar for being too expected, we want to honor the season Gongbay has put together so far.

I could give Dominique Terrell a season achievement award as well because he too has emerged as one of the best players in the area. He's the third leading rusher and has 22 touchdowns combined passing and rushing -- and that doesn't even take into his account his contributions on special teams.

On Friday he turned in a performance that was out of the ordinary even for him. In the first half alone, Terrell accounted for five touchdowns. Three through the air, one on the ground, and the fifth on a punt return.

Terrell didn't pile up a ton of yards, but he made them all count, helping his offense put up 38 points before half time before coasting to a 41-14 win over Heritage.

I had to change the name of this section this week, it usually says highlights but I didn't want to paint this story with that positive of a brush.

Wilson trailed H.D. Woodson 12-6 with just about five minutes to go in the fourth quarter of their game this past week when a Woodson player ended up among Wilson players on the sideline as a punt sailed out of bounds.

The fight started there, but spread quickly through the rest of field and into the stands, according to Allen Goldenbach of the Washington Post.

(Referee Toni) Morgan added, "It was kind of a scary situation because there were kids coming out of the stands. There was just so many people. It was out of control."

As a result, the game was called before the clock could run out. On Thursday, the DCIAA announced that they have suspended five players (three from Woodson, two from Wilson) both from game action, and 10 days from school.

DeMatha At Good Counsel: Friday at 7:30

DeMatha and Good Counsel have all the history that made the Robinson/Lake Braddock game so great, and the added fire of six straight meetings in the WCAC Finals. The first five were by DeMatha before Good Counsel was able to break through with a championship last year.

Neither team has played up to expectations this season, but that doesn't take much of the luster away from this matchup. These are still two nationally recognized programs that usually seem to play each other close.

Friday's game will be held at Good Counsel, so the Falcons will have an advantage in that regard. Usually the Catholic schools will play on Saturdays, so the Friday night matchup should also add some excitement. I'll be in attendance and will have a full recap for you next week.