Is that Coach Jim Zorn on the sidelines? Mike Shanahan and the Redskins made dreadful decisions in a 37-25 loss at Detroit.

Share All sharing options for: Chain Reactions: Washington Redskins Are Frightening In Loss To Detroit Lions

Halloween was certainly no treat for the Redskins fans, as they were once again tricked into believing this time it would be different. This time, there would be no letdown against a 1-5 team, right.  Sure the Detroit Lions were favored, but come on, the Redskins had already beaten the Eagles and Packers. Plus, they had the experience of falling flat on the road earlier this year in St. Louis.  Mike Shanahan would surely have his team guarded against a let down right?

Wrong. A 37-25 loss, low-lighted by a 23-point 4th quarter from the Lions and the benching of Donovan McNabb, aka the Pro Bowl quarterback they traded for this off-season.

This following edition of Chain Reactions is a tale of a frightful trip to the Motor City. Reader discretion is advised. 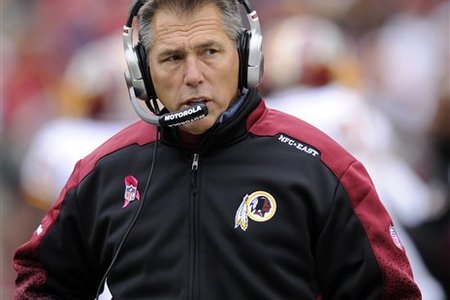 Mike Shanahan dressed up as Jim Zorn on the sidelines on Sunday with some mind boggling decisions. With 2:22 left in the game and two timeouts, plus the two-minute warning, Shanahan elected to go for it with the Redskins facing a 4th and 10 at their own 28.  Donovan McNabb is sacked. Somehow, the defense holds the Lions to a field goal, and it is now a six-point deficit with 1:50 to go. At this point is when Shanahan has his swinging gate moment.  Rex Grossman takes over because ...

"I felt Rex gave us best chance to win."

Donovan McNabb has not played great as the quarterback of the Redskins. He has made more than his fair share of mistakes, and has been frustrating to watch at times. However, he has not gotten a lot of help from his offensive line, and Sunday was no exception. There is no running game to speak of, and the offensive line play is ... well ... offensive. Could Derrick Dockery be that bad?  They gave up 7 sacks and 12 hurries, and had 11 plays that resulted in tackles for loss.

Even after being replaced by Grossman for the final 1:50, McNabb said all the right things.

"He makes the decisions," McNabb said. "He's the head coach. I just continue to go with it and just cheer for my team."

Remember McNabb's opening press conference where he talked about finally getting to play in an offense that was committed to running the football. That was funny wasn't it?! Kyle Shanahan calls plays like he is Mike Martz's kid.  Could there have been a mix up in the hospital? Or perhaps that gene was not passed down.

The Redskins inability to run or try has put them in a lot of 3rd and longs this year, and once again it was a problem Sunday, converting just 2 of 14 on third down. To make matters worse, Ryan Torain has an injured hamstring.

Players were scary stupid too

In the third quarter, with the Redskins holding onto a 13-7 lead, the Lions get ready for a chip-shot field goal on 4th and 1 ... and Phillip Daniels jumps offsides. Two plays later, Matthew Stafford throws a touchdown pass to put the Lions up 14-13.  That's OK, because on the ensuing kickoff, electric Brandon Banks takes it 95 yards for a touchdown.  Oh wait ... Reed Doughty gets called for an illegal block. When it was all said and done, the Redskins had committed 10 penalties on the day and two turnovers. That is no way to win, especially on the road. 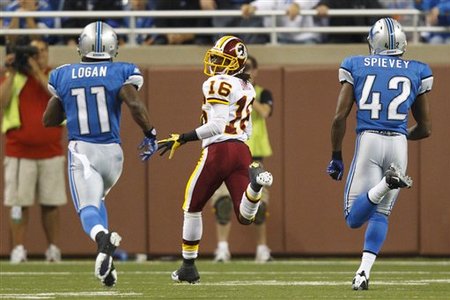 Best Rookie from the 919

All apologies to Wizards rookie John Wall, but Brandon Banks has been the best rookie from the 919 so far. Wall's high school buddy singlehandily kept the Redskins in this game. He had a 35-yard punt return, the one kickoff return for a touchdown that was called back and another that actually counted from 96 yards that put the Redskins up 25-20 with 8:21 left in the game.

At least Albert dressed up like a Pro Bowler again

For the third straight game he's played, Albert Haynesworth created havoc on the opposing teams' offensive line. He had one sack, a quaterback hurry, two tackles for loss and blew up several others plays for which he was not given statistical credit.

Maryland rolled over Wake Forest 62-14, its largest victory margin in an Atlantic Coast Conference game in eight years, and they became bowl eligible. Plus, with four games remaining in the regular season, they remain alive in the race for the ACC title and. Did I mention they are playing with a Redshirt Freshman quarterback? What a difference a year makes.

What a difference a week makes for Navy

A week removed from blowing out Notre Dame, Navy suffered a setback on their path to another bowl season with a 34-31 loss to Duke. Duke has not been a good team this year, with their lone win coming against Elon in the opener. However, Saturday they jumped on Navy early up 24-0 at the half and held on for the win. 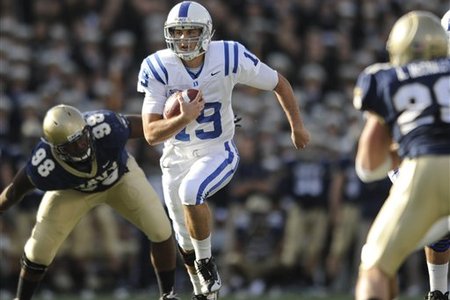