The play that changed the Army-Navy Game happened right before the half ended. After falling in a 17-0 hole, Army was driving down the field and were just a couple yards away from cutting the lead down to 17-14 at the end of the half. Seeing as they were getting the ball to start the second half, there was a very good chance for Army to pull off the upset.

Instead, Navy made a big play on the goal line. They somehow forced quarterback Trent Steelman to fumble on top of a pile, and all-world defensive back Wyatt Middleton scooped it up and took it back 98 yards for a momentum-killing touchdown that gave Navy a 24-7 lead. The play is the longest from scrimmage in series history, replacing the 77-yard touchdown catch by John Howell from earlier in the game. It also made one Navy fan very, very excited. 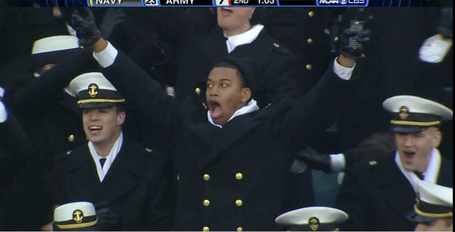 Video below the jump: