We mentioned earlier that there was flooding at Qualcomm Stadium last night due to tons of rain in the San Diego area. At the time, it looked like the Poinsettia Bowl game between Navy and San Diego State would not be able to take place. Thanks to some overtime work by stadium workers, the water was mostly cleared from the stadium, causing Poinsettia Bowl executive Bruce Binowski to declare that the game was still on.

But that's different than saying the field is perfectly playable. That remained unclear leading into the afternoon, but this picture by Adam Jacobi of CBSSports.com should clear that issue up. 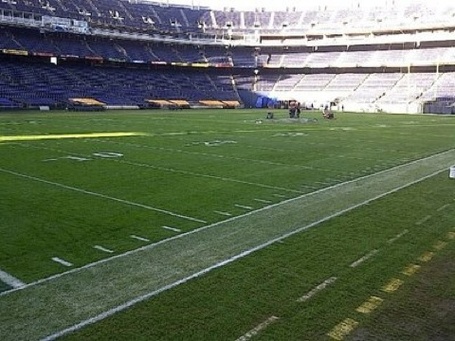 That field actually looks very, very playable. The lines are easy to see, and there's no water building up on the turf. Impressive.

Of course, there is probably a lot of mud underneath the grass that will pop up once the players hit the field, which will hamper the game considerably, but there's no way we could have expected perfection after the field was submerged in 10 inches of water just 24 hours ago.