Bob Bradley, the head coach of the United States Men's National Team (in case you've been wondering what USMNT stands for), announced the final 23 man roster that will compete in next month's World Cup today. Three of those 23, have spent at least part of their formative soccer years in the DMV, which gives us the right to feel proud about their inclusion on the team. 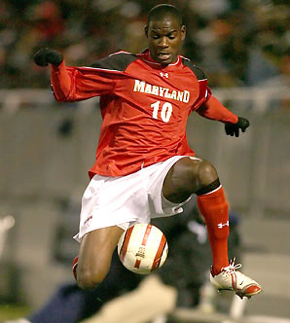 That's Maurice Edu. He plays for FC Rangers in the Scottish league, but as you can see, he once suited up for the mighty Maryland Terrapins. Edu played for the Terps from 2004-07, and was an important part of the Maryland team that captured the national championship in 2005.

Fellow Terrapin alumni Clarence Goodson joins Edu on the squad. Goodson is a Springfield, VA native and played his high school footy for Annandale and W.T. Woodson, before playing for the Terps from 2000-2003.

The other DC connection lies with Olney, MD native Oguchi Onyewu. Onyewu attended Sherwood High School and plays for AC Milan, one of the top teams in Italy's Serie A. He is one of the best defenders on the planet, but is coming off a serious knee injury that might slow him down some in South Africa.