Chris Cooley Tries His Hand At Holding At Redskins' OTAs

Share All sharing options for: Chris Cooley Tries His Hand At Holding At Redskins' OTAs

I had to spend a considerable amount of time with a thesaurus this morning to find a word that could describe the Redskins kicking game last year, but that was also appropriate enough to appear on a website that may be read by children. That word is, unpleasant. It was just unpleasant for everyone involved; the fans, the team, and the kicker who would be fired by the end of the season.

But that was last season. Ancient history; and Half Smokes does not have a rear view mirror. We're only looking forward, people. Looking forward to next season, and anything the Redskins can do to get that kicking game back on track. With that in mind, there's this: 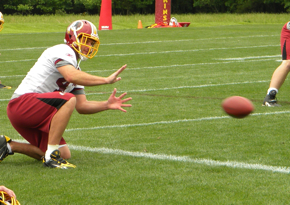 Even though you can't fully see the "47" on his jersey, that face mask is unmistakable. Chris Cooley, who normally appears as a tight end for the Redskins, tried his hand at holding kicks at Redskins OTAs Wednesday.

Now this wasn't just, "Hey Cooles, what are you up to? You trying to hold some kicks right now?" Punter Josh Bidwell had a lot of trouble over the course of OTAs holding for a left footed kicker, something he had never done in 15 years of holding kicks (which is a pretty exhilarating way to spend 15 years of your life, let me tell you).

After practice, Cooley had this to say, via Matt Terl's Redskins blog:

"Clearly, I have the best hands on the team," Cooley said, "so I was invited to be the backup holder. Plus I'm the backup on, I think, every special teams spot. I'm the backup kicker, punter ... I'm just a specialist extraordinaire..."this is my first week holding, so have complete faith in me getting the ball down." For all that, though, he doesn't lack confidence. "It's not that hard," he said. "I mean, I'd get better at it, but I could do it in a game today."

Some of that was sarcasm, but that last bit wasn't. Cooley is confident he could walk into an NFL game today and successfully hold a field goal attempt. You know what? I don't doubt him for a second.