On Thursday, President Barack Obama will host the Duke men's basketball team at the White House to congratulate them (and this pains me to type) on the National Championship they won last month. You know the drill; they'll hand him a number "44" duke jersey with his name on the back, he'll make a snarky comment which every payer is constitutionally obligated to laugh at, then a quick photo session.

Let me tell you a little about myself before you decide to read on. I just recently graduated from University of Maryland, and still live in College Park. I am a card carrying member of the Duke hatred fan club. Which means I don't just hate Duke, but I enjoy myself while doing it. Sure, other teams might be bigger rivals to Duke, but I don't think its possible for anyone to hate them as much as we do.

If you're a Duke fan, I recommend you stop reading here, because you're not going to like what you see. If you're like me, and the sight of Jon Scheyer makes you want to punch somebody in the stomach, then please join me after the jump where I'll lay out what I would do if I was Barack Obama at today's visit.

First of all, if I was the Head Honcho I would have found some way to rig the final four, and possibly the entire NCAA tournament, to make sure Duke was knocked out as quickly as possible. We know he has the resources to make this happen, and I have more than enough motivation. But its too late for that, so lets focus on things we can control, albeit in this completely hypothetical world I just created.

First, I wouldn't accept the jersey. Sure, I'd take take it when they handed it to me, but I'd immediately throw in on the ground, and take an intense pleasure as I ground my feet into it; making sure my kicks were extra muddy, Rick James style.

Then I'd take the Duke team out to the basketball court the President had installed, and ROAST each player one-on-one, yelling "See?!" to the collected media after each game point. We know the president can ball, so this shouldn't be a problem; just look at that stroke. 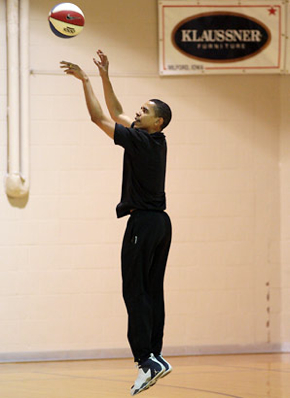 Finally, I'd have the photos taken while each Duke player was still pouting about the one-on-one beat down, you know, for posterity's sake.

That wouldn't be too much would it? I know the White House hosts champions from every sport, but lets not forget, its our tax dollars that are paying for it. So its not totally out of the question to ask the President to do some of the things we always dreamed of.