As Expected, It's Nearly Impossible To Get Tickets To Stephen Strasburg's Debut

Share All sharing options for: As Expected, It's Nearly Impossible To Get Tickets To Stephen Strasburg's Debut

Trying to get a ticket for Stephen Strasburg's debut? Good luck. Those tickets went faster than pretty much any regular-season sporting event I've ever lived through.

At approximately 7 p.m., the first reports of the Nationals saying June 8 would be Strasburg's debut came in. Five hours later, via Dan Steinberg, this is what their single-game ticket web page looked like. 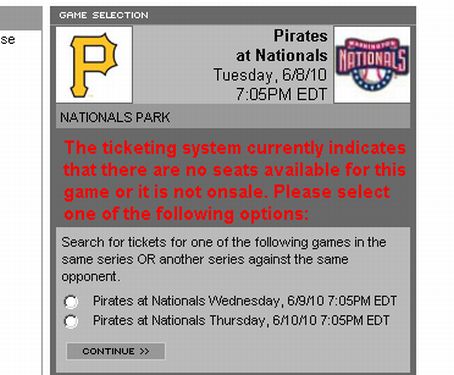 There's always the flex plan, but even that is subject to availability, which doesn't exist now. Oh, and if you were thinking of using something like Stubhub, be ready to pony up some serious cash. Right now, the cheapest ticket available is $55 for the outfield reserve section, and the prices go all the way up to $2,000.

It all means June 8 will be a spectacle unlike anything the Nationals have ever seen, as MASN's Ben Goessling writes:

And for the Nationals, this is uncharted territory. For the first time since they moved to Washington, they will be watched, even scrutinized, by national media. Thousands of opinions will stream in about how general manager Mike Rizzo's meticulously-crafted pitching plan, executed by his minor-league lieutenants and two coaching staffs, played out; did the Nationals promote Strasburg too soon? Not soon enough? Second-guessing has been rare in these parts, but it's about to arrive.

So, though, is a different comet tail. For the first time, the Nationals will have a bankable star on the order of an Alex Ovechkin; as good as Ryan Zimmerman is, Strasburg already has more national recognition than Washington's franchise third baseman. Strasburg can move tickets and put games on TV sets across the country, and with him comes the Nationals' introduction to a much wider audience.

We've already seen the effect Ovechkin had on the Capitals' fanbase. If Strasburg has the same effect, then NatsTown will become the new Rock The Red.

The Stephen Strasburg Watch: How Many Innings Will Strasburg Pitch Tonight?