Want To Own A Piece Of Strasburg History?

Share All sharing options for: Want To Own A Piece Of Strasburg History? 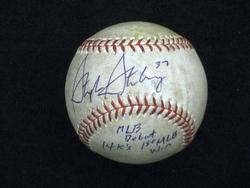 Major League Baseball has already started auctioning off pieces of memorabilia from Stephen Strasburg's debut on Tuesday against the Pirates. Currently there are several balls and bases and rosin bags for sale, but apparently the most wanted item of them all is the above pictured "Signed and Inscribed 'MLB Debut, 14Ks, 1st MLB Win' Game-used Baseball" that is currently going for a mere $8,010.00.

The auction ends on Tuesday, so get your bids in now kids. It is almost comforting to know that MLB will never cease to find some sort of opportunity to cash in on any sort of achievement possible. What won't be comforting is that if Strasburg blows out his arm (knock on wood that this NEVER EVER HAPPENS) and never pitches again (again, knocking on wood), then someone will have shelled out nearly $10,000 for a pretty worthless ball.

What I am saying is that its a little early in the career of Strasburg to be auctioning off bits of "history" that are less than a week old. Just smacks of poor taste. Give the kid a little time to build up a career, why don't you?

In the end, if he blossoms like we all hope he does than that $10,000 might turn out to be a pittance, if not, then sadly MLB was selling high. Personally, I wish they were doing neither right now.