D.C. Talking Points: What A Week, Now What?

Share All sharing options for: D.C. Talking Points: What A Week, Now What?

Welcome to Talking Points, where each week I will run down the stories that made the biggest splashes in the blogosphere last week and will tell you what to keep an eye on for the week to come. It's the perfect way to get all the local sports information you need to hit the water cooler with authority. Last week sure was an exciting week, mostly because it was SB Nation D.C.'s debut! I hope you read us each and every day, but if you didn't let's take a look back at all the fun you might have missed.

Two words can sum up the last week for the Nationals. Or, should I say, two names: Strasburg and Harper. If you were on this site at all last week, you saw a million different Stephen Strasburg stories, and why not? That kid is as much fun to watch pitch as he is to write about.  With his spectacular debut, people went all out to make a dollar on young Jeeezus, selling dirt, changing names of towns, creating baseball cards, inventing several new hamburgers, selling lots of tickets and selling tons of jerseys in opposing teams' stadiums. Even the media have a chance to cash in. Instead of calling him Jeeezus, maybe they should call him "The Alchemist," because he apparently can turn anything into gold.

Oh, by the way, he also won his second major league start, salvaging the series against the Indians.

Bryce Harper got drafted last week (along with a bunch of other guys, read about the whole draft here and here) and was told he couldn't wear his trademarked crazy-man eye black. He's going to immediately be moved to the outfield. Washingtonians can now commence the speculation on how much it will take to sign him.

The two largest stories for the Wizards this week were entirely due to off-court issues. First, Reebok made John Wall a very very rich man, signing him to an insane five-year, $25 million deal to be the new face of its basketball shoes. Remember, he's yet to even be drafted by the Wizards, but that apparently is a mere formality at this point.  I mean, if the new owner is doing the John Wall dance when he gets the No. 1 pick, one has to be pretty sure that he will be picking John Wall.

Secondly, speaking of the new owner, yes it is official. Ted Leonsis was approved to be the new owner of the Wizards. Leonsis gave a press conference after he was approved, where he wound up talking about his plans as the new owner and even praising Gilbert Arenas himself. Later in the week, Leonsis realized the folly of his behavior and turned around to diss ol' Gil like he should've been doing all along.
Ted also said the team would go ahead and reach out to former season-ticket-plan holders for a round-table discussion, proving, yet again, that he is the Anti-Snyder in almost all respects as a team owner. Sadly for the squad, their unfortunate name isn't changing anytime soon but, mercifully, their uniform colors might. I, for one, hope the colors go back to the red, white and blue that they used to rock back in the day and that eventually the name gets changed to something, anything, else besides the Wizards. Lets make this happen Uncle Teddy!
Other Tidbits:

Another quiet week for the Redskins, which is a good thing according to my book. This means the players, coaches and management are focused on one thing: turning this 4-12 team into something this city can be proud of. Well, at least almost all of them. Certainly this transformation will not happen overnight, nor do I have delusions of the playoffs with our offensive line, but it's tough to not improve on four wins in the NFL. Signs of progress, that's all I want.
Other Tidbits:

These guys seem to be quite content letting the Hershey Bears take up all of the local hockey spotlight for now, as they are currently one win away from capturing the Calder Cup. Everyone should make an effort to tune into CSN to watch these guys try to win it all. They're a fun team to watch and they even blast Justin Beiber in the locker room. Wait, that isn't good, let's hope that at the very least this is being done in an ironic sense.

In Ovechkin news, he's still having a great summer and he's even been animated, but the question of what is next for Alex Ovechkin was discussed in two places: this insightful piece on Japers Rink and  here. Personally, I just think he needs to simplify his game a little more in the playoffs and just stop pressing so much. Ovie is best when he's loose, and he was hardly that against Les Habs.
Other Tidbits:

Craig Mack "Flava In Ya Ear" 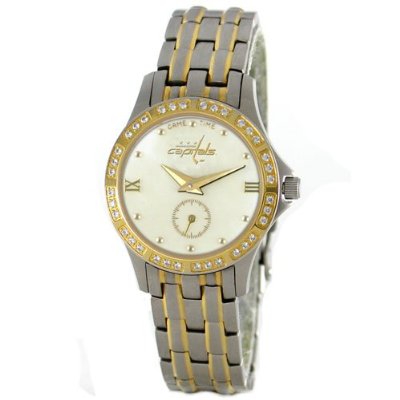 This item right here is a ladies Washington Capitals watch that is for sale on Amazon.com right now for the low, low price of $1,799.99. Obviously this watch is only for the discerning female Caps fan, as it contains 36 single-cut diamonds throughout its face. Yes, 36 diamonds.  In addition, gold is all over this piece of time! Gold is in its hands, indices, crown and even the team logo which is on a mother of pearl dial. MOTHER OF FREAKIN' PEARL! Luckily, it is also water resistant, because nothing could be worse than if you were at a Capitals game when a beer spilled on your $1,800 official team watch. That is the stuff of nightmares right there. Ladies, hop on this now ... SUCKERS!

Stephen Strasburg, Bryce Harper, John Wall, Alex Ovechkin. These are the names that everyone in this town are currently all talking about.  Harper is a good three years away from being here, if all goes according to plan, but the other three will all be full-time starters starting next season. Another player you should add to that is list D.C. United's 17-year-old phenom, Andy "I'm not Freddy Adu" Najar. This kid is, by all accounts, everything Freddy Adu should've been without any of the hype that Adu brought with him. In other words, another game-changing player on a D.C. team.

However, which organization is missing from this list? Which team, that has had a stranglehold on the Washington D.C. sports scene for at least the last 40 years, does not have a young, dynamic game changing star that will hopefully be leading his team to the playoffs for years to come? That's right, the Washington Redskins.

You would think that Snyder and his merry men would see a pattern developing in this city and want to change it through other means than trading away already limited draft picks for an aging quarterback and signing running backs nearing the end of their careers. While the rest of this city's teams have adapted their team-building strategies to compete for the present and future, Snyder has seemed to only care about the past and present ... except for the offensive line. I don't know what the Redskins are thinking there at all.

Sure getting Mike Shanahan to coach seems like a good move right now, and the draft that he ran with Bruce Allen seemed to have been solid, but the Donovan McNabb move reminds me too much of the Bullets getting Bernard King in the nadir of his career. He might play alright for a bit, but it is not the way you want to run a team in the long term. Was Jason Campbell the solution? Probably not, but neither is McNabb. and they could've saved some draft picks sticking with the status quo. Not very forward thinking on their part.

The Capitals are already drawing away Redskins fans' dollars (have you seen the sold out stands rocking the red?). The Nationals are just starting to do the same with Strasburg mania, and the Wizards will do the same when Wall arrives. If Snyder doesn't start changing something very soon, the Redskins will lose their grip on this town (if they aren't losing it already) and might never get it back.

Keep in mind, I'm not sad about fans paying attention to other sports. Fans watching and supporting all the teams in D.C. is a great thing. I've long felt that the Redskins monopolize too much of the media and dollars of the fans and now there are many alternatives to cheer for and that is fantastic. What I am sad about what it means to this once proud franchise. I never wanted the Redskins to become like the Bullets, but it seems like that is what's happening and there's nothing we can do to stop it.