Why Do So Many Fans Want To Rename The Wizards? Because For Many, It's Personal

To answer that question, we need to go back to when the name was first changed.

Share All sharing options for: Why Do So Many Fans Want To Rename The Wizards? Because For Many, It's Personal

Ever since Ted Leonsis said he was "shocked" that so many people are asking him to change the Wizards' nickname, I've been wondering why this is such a hot-button issue for so many people. At the end of the day, it's just a nickname, and there are tons of nonsensical and/or unoriginal nicknames out there in professional sports (Utah Jazz? Philadelphia Phillies?). Winning remains the best way to market a team.

But at the same time, it clearly matters to a lot of fans. Take this post from On Frozen Blog, a hockey blog.

It's incongruous. It bears not even a tangential relationship to anything about this region. It's inexplicable - which incidentally is precisely what the Washington Post said about it at the time of its selection. It needs to die a death quicker than what I imagined when I first wrote about this a few weeks ago.

Those are some pretty harsh words, but they also represent the sentiments of several people I've talked to. The argument is basically "Wizards" represents the team's failure over the past few decades, while "Bullets" hearkens back to better times. But to me, that really isn't the issue at hand. The real problem is that, for many fans, this issue remains deeply personal.

The truth is, the mid-'90s Washington Bullets desperately needed to be re-branded. To hear people talk about how great the team's colors were at the time is funny to me. Sure, the classic red, white and blue colors of the '70s were great, but that wasn't the team's logo by the mid-'90s. Instead, it was that thing.

The uniforms? Plain white or red, with that logo. Combine that with a depressing team, the poor facilities and an old, danky arena, and it did seem like the team was old-fashioned. Beyond playing better, a re-branding was necessary, as much as we want to say it wasn't.

But of course, a re-brand doesn't mean a name change to "Wizards." I have a hard time begrudging Abe Pollin too much for feeling uncomfortable about his team being called "Bullets" -- it's his team, and it'd feel weird to question his sense of morality too much. At the same time, there was definitely some funny business going on that has been lost with time. 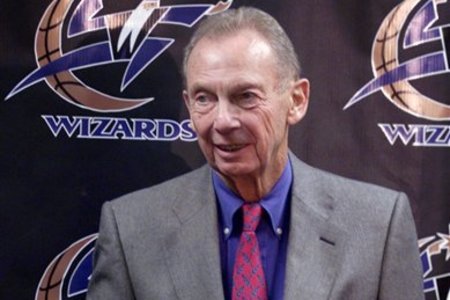 Let's go back to 1995 for a second. After making a decision to change the team name, the team held an open vote where they would, in theory, allow the fans to choose the new nickname. Via Richard Justice of the Washington Post (as found by Dan Steinberg).

Team owner Abe Pollin has decided that when the Bullets leave USAir Arena after the 1996-97 season for the proposed MCI Center downtown, they'll no longer be the Bullets, sources said yesterday. In addition, Pollin apparently will allow fans to select the new name later this year in a name-the-team contest.

Now, I don't remember exactly what the tenor of the city was at the time, because I was 10 years old. I do remember participating in the initiative, but I don't remember my suggestion. But I know this: One of the major complaints about the "Wizards" nickname, one echoed by On Frozen Blog, is that it has no connection to the city itself. The nickname "Wizards" is a foreign to this city as roads without potholes. As OFB writes:

‘Wizards' might pass (meagerly) as a team name in other communities (though conspicuously few seem to be leaping upon it), but the legacy of team names here is elevated well beyond it, dating back generations. Once upon a time we had a professional soccer team here named the Diplomats. They were known as ‘the Dips.' It's interesting to reflect on that insomuch as the baseball and hockey teams (and football for that matter) bear a strikingly similar shorthand. We're a region that just reflexively foists a shorthand upon our teams' names (O's), and the reflex when it is applied to the basketball team evokes urinals.

More seriously, there is something of a national pride evoked for teams named Nationals, Capitals, Senators, or Diplomats. And a distinctive sense of elevation: by virtue of who we are as a community we do not do Cougars, Clipper Ships, or Storm with our team names.

Again, this is a common criticism I hear now from fellow fans. So if it's a common criticism heard now, it stands to reason that it was an important issue back then for many fans as well. There are many potential nicknames that refer to something unique about Washington D.C. None of those nicknames were the five ones that were selected as finalists. Considering how much the local connection matters, I find it really hard to believe that none of the five most popular nicknames selected as finalists had some sort of connection to the city.

So there's the first problem. But wait, it gets worse. Once the five finalists were selected, fans were given an 800 number where they could register their vote. The nickname with the most votes would be the one the team would ultimately select. In light of that, it would have been nice to have seen the final results, but the Pollin family refused to release them. Via ESPN's Page 2:

In general, Bullets fans were not amused by any of the choices and, though an 800 [sic.] number was set up to let the public vote for their favorite name of the five, in the end Pollin and the Bullets front office did not release the final tallies. Pollin went ahead and announced that the team, which was moving into the new MCI Center in the fall of '97, would be rechristened the Wizards.

It's possible that Wizards was the choice that ultimately got the most votes, but it's equally possible that it didn't. Considering the widespread outcry after the choice was made, I'm guessing it was the latter. Regardless, there was no good reason not to release the final tally. So why didn't the Pollin family do it? Good question. 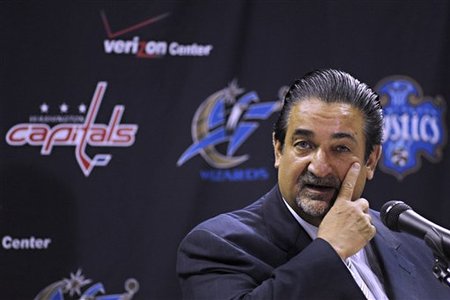 So when Ted Leonsis wonders why so many fans care about this, here's my answer: Those fans felt betrayed back in the day. The team seemingly was interested in what the fans thought. They held a gimmick contest to rename the team, making it seem like the fans could make a difference. The fans did their part, submitting tons and tons of name suggestions. Collectively, they left no stone unturned. But when it was all said and done, the five finalists were ones that clearly did not reflect what the city seemed to want. I could be wrong here, but I doubt it. Knowing how this city works, there's no way that those five names were the ones most people wanted.

Worse yet, even after the five finalists were chosen, many fans felt betrayed. Fans were given a chance to vote again, on the condition that we'd also give $1 for anti-violence efforts. Those fans were happy to do that, even though they mostly weren't thrilled with the choices. But when that was all said and done, the team wouldn't even release the voting results. Those fans had no idea whether our voices were actually heard. And for what reason? To this day, I don't know.

But at the same time, fans were also told the team would listen back in 1995, and it's unclear whether the team actually did. That, to me, explains why so many fans care about the name change. We fans have been given another chance to really make our voices heard on this issue, and this time, we're going to do everything we can to make sure the team is listening.