Forget Roy Oswalt, Why Don't The Nationals Sign This Guy? 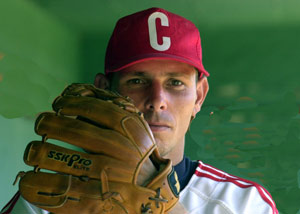 Instead of having to trade prospects and take on salary, why don't the Nationals just pay the money for this recently unblocked Cuban defector named Yunieski Maya. Don't know him?  Well, he is a 27 year old Cuban pitcher who was the best pitcher on the Cuban National Team, was a part of the World Baseball Classic and was a pretty impressive pitcher during the Cuban National Series according to ESPN Deportes:

His numbers are not too shabby, but can they translate to the majors?

Most seem to believe it is possible that his pitching will work out fine, at least according to scouts he tried out for around Christmas. Via MetsBlog:

Jorge Arangure of ESPN.com quotes a scout who watched Maya as saying he threw in the 88-92 mph range, while sporting a fastball, two-seamer, a slider, curveball and a changeup.

With those few sentences and my limited baseball scouting history, I'm going to go out on a limb and say that he sounds like the Cuban John Lannan. If he has the potential to just be that average, why not take a flier on him? The Nationals had a chance to sign another, more electrifying, Cuban defector, Aroldis Chapman, earlier in the season but chose not to much to my dismay. Chapman, however, is far less a polished product than Maya.

Sure Maya is more of an unknown than Roy Oswalt, but they would also give up far less in testing these waters than on an older veteran that will only be in town for one season. Maya could be good for a few years and even if he fails at a starting pitching, at worst, he would be another solid acquisition for the bullpen. The Mets, Yankees, Boston, Toronto and others seem to think he can pitch and are interested in his skills. Why not the Nationals?