Moving Past The Decade Of Mediocrity

Losing seasons have been the norm for D.C. sports fans, as the Redskins, Capitals, Wizards and Nationals have won just 1,165 out of a possible 2,673 games in recent history. Thankfully, the influx of young talent with franchise players such as Alex Ovechkin, Stephen Strasburg and John Wall means that brighter days are ahead for our nation's capital.

Share All sharing options for: Moving Past The Decade Of Mediocrity

As I watched player after player from the Chicago Blackhawks raise Lord Stanley’s Cup, I couldn’t help but feel jealous.

I mean no disrespect when I say this, but as good as the Blackhawks were this year, part of me couldn’t help but feel they were celebrating in place of a better team.

The Washington Capitals skated through the regular season with ease – racking up the league’s best record and, at times, looking like men among boys as they toyed with the competition.

Even though the franchise’s 37-year history tells us that playoff disappointment is the standard, I couldn’t help but trick myself into believing this was the year when everything changed. These weren’t your father’s Capitals.

At least, that’s what I told myself.

Of course, these are my father’s Caps. I know this because they completely choked in the playoffs – losing in the opening round to the Montreal Canadiens, who were the eighth seed in the Eastern Conference.

And here’s the absolute kicker – this devastating and humbling loss represents the high point for D.C. sports over the last 10 years. 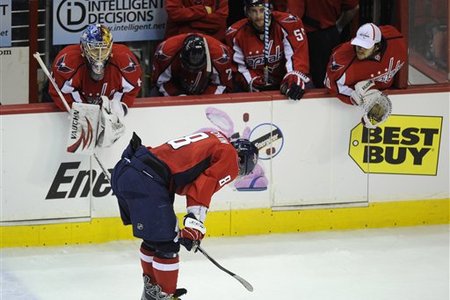 Think about it. What else has the local sports scene – specifically the Redskins, Capitals, Wizards and Nationals – provided during that timeframe besides heartache and disappointment?

Call it the decade of mediocrity.

The Redskins have a 70-90 record over their past 10 seasons. The high point was in 2005 when the ‘Skins, led by Joe Gibbs, went 10-6 and qualified for the postseason. No one actually believed the Redskins, with such a pitiful offense, were capable of doing anything in the playoffs, but it was nice to be invited to the party for a change. Also, that 2005 season stands out because it’s one of only two 10-win seasons since 1992.

While I shouldn’t nitpick the only team out of the bunch with a winning record over the last decade, it’s downright depressing when you realize just how bad the Caps were prior to the past two seasons, when they won a combined 104 games.

The Wizards have a 334-486 record over their past 10 seasons. They’ve been so bad for so long that even bringing in the best player in NBA history failed to help their cause. During the 2004-05 season the Wiz went 45-37. While that doesn’t sound like much, and admittedly it isn’t, that’s the most wins this franchise has put together in a single season since 1978-79.

The Nationals haven’t actually been here for a decade yet, but they’ve lost enough games to make up the difference. They’ve gone 374-499 since their arrival in 2005, and this season’s 31-33 record is easily the bright spot.

But here’s the silver lining – brighter days are ahead. 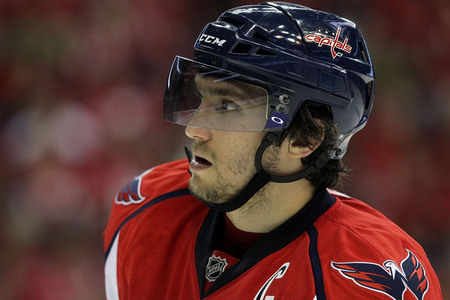 After suffering through the past decade, the D.C. sports landscape has received a much-needed shot to the arm. The biggest influx of young, can’t-miss talent any area has ever received in such a short span is here to wash away the pain. And it couldn’t come at a better time.

The Capitals were the first local team to finally catch a break. Landing the chance to draft superstar Alex Ovechkin was like winning the lottery, and the 24-year-old is already the best player in franchise history.

"He’s like a linebacker on skates," Redskins defensive lineman Phillip Daniels said. "He can shoot. He can pass. He can hit. The guy’s got it all."

Skating alongside Ovechkin is the silky smooth Nicklas Backstrom. The 22-year-old is a top-line center who has improved in every statistical category possible during his three seasons in Washington. Sure, everyone knew Backstrom could pass, but this season he even added a scoring touch – netting 33 goals and 101 points to finish fourth in the league in scoring.

Having these two talents locked up for the next for the next decade is enough to bring tears of joy. As long as they’re both healthy, the Capitals have a chance. 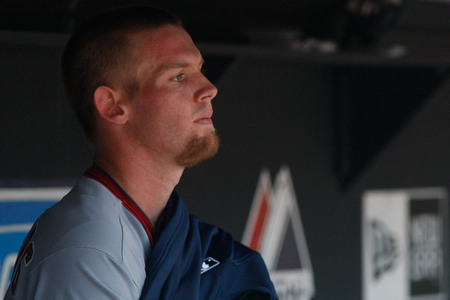 Once the novelty of having baseball back in D.C. wore off, fans largely ignored the Nationals. That is, until Stephen Strasburg came into our lives. Seemingly overnight, the Nats are now relevant on both a local and nation scale. It doesn’t matter that the 21-year-old pitches once every five days, the Strasburg Effect changes everything.

"I mean, the kid is one of those guys who can change a franchise," said Redskins cornerback DeAngelo Hall to team blogger Matt Terl.

Strasburg represents one of the most heralded rookies in baseball history, and yet, he’s not the only can’t-miss prospect in the system. The Nationals also have rookie pitcher Drew Storen, who was chosen in the same 2009 draft as Strasburg, and slugger Bryce Harper, the top pick in this year’s draft, in the mix.

None of these guys will erase the memories of back-to-back 100-loss seasons, but they’ll each do their best to ensure that nothing like that happens again for a long, long time. 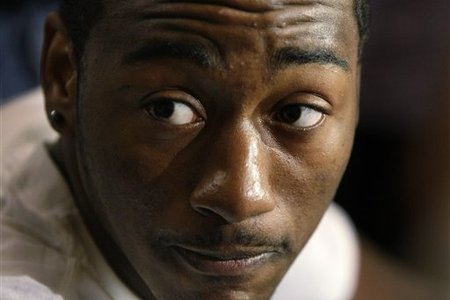 The Wizards don’t have their savior yet, but he’ll be here by the end of the month. After posting a 26-56 record during a disastrous season in which Gilbert Arenas self destructed and known commodities such as Antawn Jamison, Caron Butler and Brendan Haywood were all deported, the Wizards actually caught a break.

They landed the top pick in this month’s NBA draft, which means that Kentucky point guard John Wall is on the way. This, my friends, is a good thing.

"Obviously, he’s a phenomenal basketball player," Redskins defensive end Jeremy Jarmon said. "He plays with passion. He plays with heart. He’s a hard-working, intelligent young man and he’s going to bring all of that here. I’m excited about having him here."

It should be noted that Jarmon might be slightly biased, since he too is from the University of Kentucky, but everything he said about Wall seems to be accurate. He’s far and away the top talent in the upcoming draft and, as the point guard, will have a chance to lead this downtrodden franchise in the right direction. 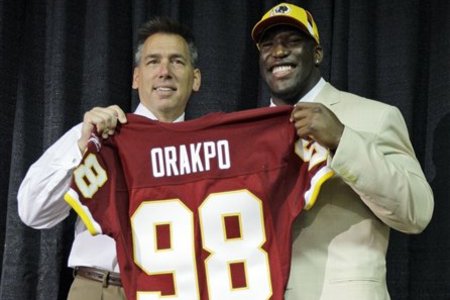 The Redskins are the one local team that has yet to land a definitive, franchise-cornerstone youngster, but they do have some young studs.

Guys like linebacker Brian Orakpo and tight end Fred Davis showed last season that they’ve both got what it takes to compete at the highest level, and if offensive lineman Trent Williams lives up to the lofty expectations, it’ll go a long way toward helping the ‘Skins return to respectability. Add in proven winners like coach Mike Shanahan and quarterback Donovan McNabb and they have the potential to at least make things interesting this season.

All of which makes cheering for local sports in our nation’s capital a hell of a lot more tolerable.

"In the past, we’ve always made moves that have gotten people stirred up, but they never quite worked out," former Redskins offensive lineman Chris Samuels said of the D.C. sports scene. "But this time, I really feel in my heart that we’ve gotten it right. I’m excited. As a former player, I wish I could be a part of it.

"I’m excited though," Samuels continued. "This area is definitely big time now. I’m really excited about all the names we’re bringing in and hopefully things are turning around and all of us will start winning consistently. These fans have always stuck with us and shown their support. They’ve paid their dues and now it’s our time. We’ve all been waiting a long time for this."