Surprise: Albert Haynesworth will not be attending the Redskins' mandatory minicamp, and has demanded a trade.

Actually, sarcasm aside, a lot of people didn't see this coming. To illustrate, fellow editors Brock and Mike have helped me compile some fun quotes, links, and tweets from before and after Haynesworth's announcement.

Albert is a key part of the team, and he will be ready to go. Just wanted to clear things up a little for the people who believe everything that writers put out there. Like the old saying goes: Believe none of what you hear and only half of what you see.

“He’ll be completely bought in,” Hall said. “It won’t be any half [trying] on the football field. You may not like some things going on in the front office but at the end of the day, it has nothing to do with football. It’s 11 on 11, my 53 against yours and we’re going to war. … Anybody who’s been on this field knows we’re building something special. You’re either going to get on the bandwagon or you won’t be here.”

Bruce Allen: Redskins will be "hardest-working" team in the NFL http://bit.ly/9SNt45

RT @LarryWeisman GM Bruce Allen on Albert Haynesworth attending mini-camp: "He'll be here and we're expecting him to be in good shape."

Hmm, so Haynesworth had no clue that the #Redskins under Synder might change coaches during the contract?

albert is sending a message to the redskins that he's going to be a complete a$$ if he isn't traded. this could get really ugly/interesting

wow this is about to get real ugly

Albert haynesworth you will regret these decisions for the rest of your life!this will define your career and thats a shame!

Another #Redskins player checks in on Haynesworth. "He loves money & not football. He is a great actor. Actors get paid a lot of money."

As of late last week, I was told Haynesworth was still planning on attending but "nothing has changed" so this is next step. Not surprising.

One #Redskins player who knows Albert #Haynesworth well - when asked what he thought of decision to skip, simply said "A**hole" #NFL #Skins

Over/under on percentage of media questions in Ashburn tomorrow involving the word "Albert": 83. 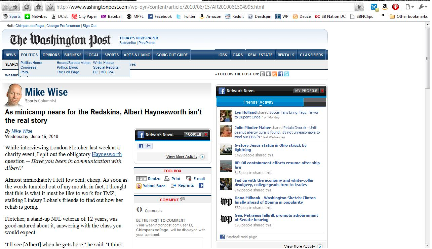 Me, last year, to my friend who is an obnoxious Eagles' fan:

Dude, with Haynesworth in the fold, we are gonna have the sickest defense in the league!