SB Nation intern Alex Goldstick tried to get into Lucky Bar in Dupont Circle during the U.S.-Slovenia World Cup match. He was turned away, because the place was full, but files this report with these photos below the jump.

Like most bars that show soccer around this time ever four years, Lucky Bar is draped in the flags of the countries that are participating in this year's World Cup in South Africa. Unlike many of those bars, Lucky Bar shows soccer first and everything else second. That's the obvious reason why soccer fans of every country pack the bar from the first game of the day at 7 a.m. until the end of the last at about four in the afternoon.

But more than any other country, the American fans packed the bar to capacity on Friday morning for the USA's matchup against Slovenia. The bouncer at Lucky Bar, dressed in vibrant shades and sporting a smug mustache, coolly sat outside the bar's doors with a giant South African flag over the entrance, informing walk-ups that no one else was allowed in side. In fact, he said, there was a line forming outside of the bar starting at 6:30 in the morning and as of 20 minutes before kick off of the USA/Slovenia game, the bar was full to capacity.

Inside, the mood was not as festive. Down 2-0 at halftime, the loyal Lucky Bar crowd was silent as hundreds of the most committed soccer fans in the city looked on with desperate eyes as the dozens of televisions, projectors, and speakers broadcast the games from half way around the world.

Below the jump, some photos. 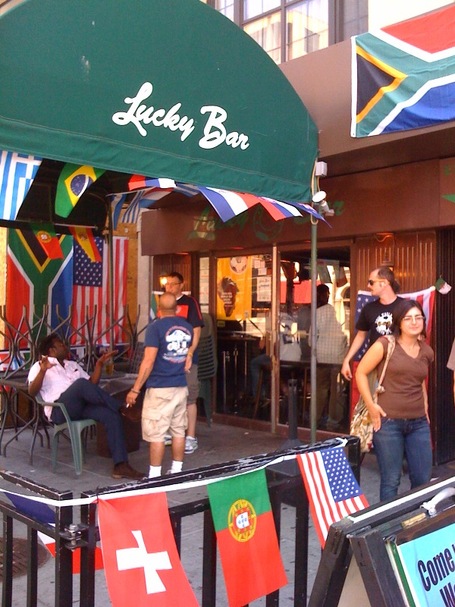 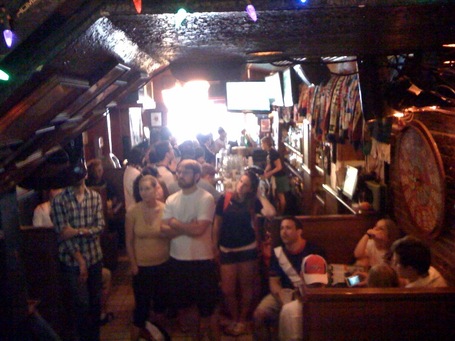 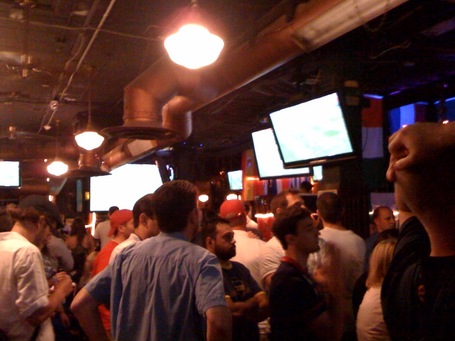