Did you hear about how Albert Haynesworth is headed to Seattle? Yeah, me neither. Unless of course, you're browsing ESPN's NFL page, where this headline was up for a good part of Saturday morning: 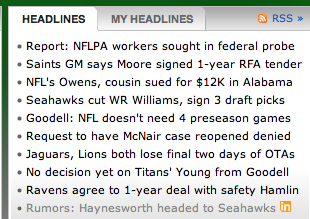 Getting a little declarative there, aren't we? I guess as long as you put "Rumors:" in front of your headline, I guess you can say whatever you want. After the jump, some rejected "Rumors:" headlines at SB Nation DC.