Redskins' wide receiver Devin Thomas is having what appears to be a busy off-season. Not only has he been getting used to playing with a new signal caller in Donovan McNabb, but he's also been doing stuff like this. 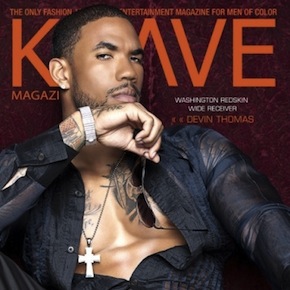 What is Krave Magazine? What is Devin Thomas doing on the cover? Most importantly, why does he have his shirt unbuttoned so much—is he preparing to be in a Marc Anthony music video? The answers to these questions and more after the jump.

Lets get to know Krave Magazine a little bit; here's a pseudo-mission statement from their website:

KRAVE MAGAZINE is the premiere publication all men of color desire and need. It is the ONLY fashion, lifestyle and entertainment magazine specifically for the urban man with urbane taste. Krave stands alone when it comes to men’s grooming and high fashion.

Ok, well I guess that kind of explains why he's dressed like that. Whenever somebody wealthier than me is dressed in a way I don't understand I always attribute it to them being more fashion conscience than me, so this actually makes sense.

But I still don't understand why he is on the cover.

Turns out, this isn't the first time Thomas has popped up in front of a camera. Check out this photo shoot Devin Thomas did a while ago, presumably for a company trying to market sexy men's pajamas; a nearly impossible pursuit might I add.

I'm Ok with my football players doing stuff like this that might seem, ummm, out of character. I think its kind of cool. But its not my approval Devin needs to worry about. He should be worried about what his teammates are gonna do when they get their hands on a copy of Krave.