Welcome to Talking Points, where each week I will run down the stories that made the biggest splashes in the blogosphere last week and will tell you what to keep an eye on for the week to come. Last week, the Washington Redskins were the big news makers while the Nationals continued their quick slide from relevance. Meanwhile the Wizards and Capitals were again, enjoying vacations. Lets get into this week's Talking Points.

After a few weeks of relative quiet (well ... for the Redskins), the sleeping lion has awakened, as the first mandatory team activity of the off-season has kicked off a week chock full of fun for fans of turmoil and sniping. Of course we are talking about the minicamp no-show (read EVERYTHING about the saga in that link) Albert Haynesworth. Fat Al stated that he wanted to be traded away because he didn't like what he heard about the new defense. I say "heard" because he's really yet to see the defensive system, since he's not been a part of any activities all summer.

Needless to say, there were a great many people not happy with this development. I'm talking coaches, teammates, other players in the league, former players and tons of fans. Basically, most people who cared about the Redskins were offended in some way or another, except Michael Wilbon, which basically speaks for itself right there. In any case, Haynesworth will be fined until he shows up to training camp to guarantee that the organization cannot take back the ginormous signing bonus they gave him. Actually, coming to camp might prove Haynesworth to be smarter than he looks. You don't mess with a man's millions.

In other stupid and short sighted news, the Washington Redskins continuted their long angst-ridden tradition of sacrificing utilizing the future for marginal gains in the present by sending away another draft pick for an oft-injured gritty aged veteran player. Offensive lineman Jammal Brown was acquired from the Super Bowl champion New Orleans Saints for an undetermined third- or fourth-round draft pick. The good news is that this is an upgrade over Artis Hicks. The sad news is that Brown hasn't played on the right side of the line since 2005, was on injured reserve all of last season when the Saints won a Super Bowl and wants Dan Snyder to make it rain for him.

This means the Redskins have lost yet another young player that would be under team control for several years in return for a player who is reaching or passing "football middle age," all because of past mismanagement by the front office. Next year, because of their trades, they are not going to have a 3rd or 4th round draft pick unless some desperate team gives up that much for Haynesworth. Win now at all costs seems to always be the refrain around Redskins Park. It doesn't matter who the general manager or the coach is. As long as Daniel Snyder is in charge the 'Skins will always be the football equivalent of an aging actor getting too much plastic surgery and starring on reality television in an effort to stay relevant when one's time has passed. Sure they've just added a bunch of "quality" veterans and on paper the team is better for it, but there's only so much lipstick you can put on this pig ... or hog, as it were.

So after all the great feelings that were built up just two week ago with the drafting of Bryce Harper, the call up to the majors of Stephen Strasburg and the fact that the team was within striking distance of the playoffs have been UTTERLY DESTROYED by this past week's six-game losing streak. Sure the box office gates have been great for the Nationals, but there is no way it is going to last long if the team keeps playing the way they have been. We've all seen how this town supports a loser, so someone please tell the players to stop choking while they're still in the spotlight.

Earlier in the week, I called for John Lannan to be shut down and boy do I wish he had been. We all could have been spared the dog of a game he pitched on Sunday where he pitched four inning on route to the team losing 6-3 to the White Sox. Now, there is speculation that he might get sent to the minors despite the manager's statements to the contrary. Something is obviously wrong with Lannan, so whether it in the minors or on a DL rehab stint, the guy needs to not work on his troubles in the majors at the rest of the team's expense.

Hopefully, the Nationals' upcoming series against the Royals and Orioles can help bring back that winning feeling. A six game winning streak certainly would cure what ails the Nats.

Not much at all happening in Wizards World right now as we lead up to the drafting of John Wall and a few other young players not named John Wall. Wall did work out for the team this week and he lived up to his billing as the dynamic, young, franchise player the Wizards need to build around right now. Meanwhile, the former dynamic, young, franchise player the Wizards were building around is out in Chicago working out and trying to get his fuego back.
I, for one, wish Gilbert all the luck in the world, as everyone knows the team will be so much better with a healthy and motivated Agent Zero on the court. Let me remind you all that his player efficiency rating in 2006-2007, the last full season he played, was ninth-best in the league. That was better than Steve Nash, Carmelo Anthony, Shaquille O'Neil, and Chris Paul amongst many. The year before that, he was eighth. These fun facts and more can be found on his page at Basketball-Reference.com. Despite his gun issues, we all must remember that a healthy and hungry Gilbert is exactly what the Wizards and John Wall need. 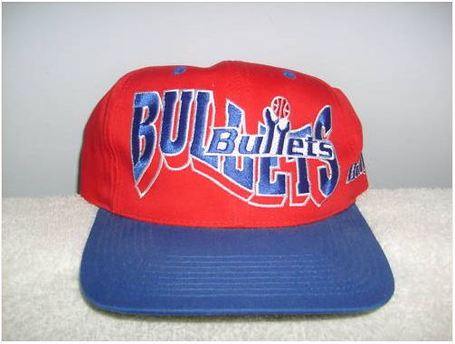 Admittedly, this is an awesome hat. I am not sure if it is worth the $174.99 price tag on eBay right now, especially considering that it is pre-owned and doesn't appear to have any of its original tags on it, but you might disagree with me. If so, then do, feel free to buy this bit of awesomeness. Do not be mad at me when i roll up next to you in the exact same hat that I found at Goodwill ... SUCKER!