Give John Wall His Burger Or He'll Get Mad...And You Don't Want To See Him When He's Mad

Share All sharing options for: Give John Wall His Burger Or He'll Get Mad...And You Don't Want To See Him When He's Mad

Don't you just love it when athletes - or famous people in general, for that matter - give you a small taste of their personal lives? Because as it turns out, they're not so different than you or me. Aside from the minor salary differences.

John Wall, to be featured on the cover of ESPN The Magazine on June 28, did just that in a one-on-one with Elena Bergeron.

-He was on track to be a football star until his mom forbid him to play because it was too dangerous.

-His boys call him "Dice," among other nicknames.

-Math is his favorite subject.

But my favorite little quirk is his pre-game meal ritual:

I'm picky, so all I eat are grapes and a hamburger with nothing on it. I get the meat, the bun, that's it. When I was at Kentucky we had a cook who would make them for us, so I'll figure something out when I get to my new city. It's kinda got to be a specialty burger, though, because I'm trying not to eat too much fast food. But I gotta have my burger or I'll get mad.

What does Dice look like when he's mad? This? 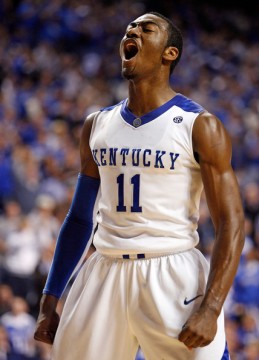