Laron Landry Says This Year Will Be Different...Again

Share All sharing options for: Laron Landry Says This Year Will Be Different...Again

One thing LaRon Landry loves to do is talk.

Before plays, between plays, after plays, you name it. He does his talking on the field, but not in the abstract way fans and coaches adore. His clear aversion to tackling will attest to that. 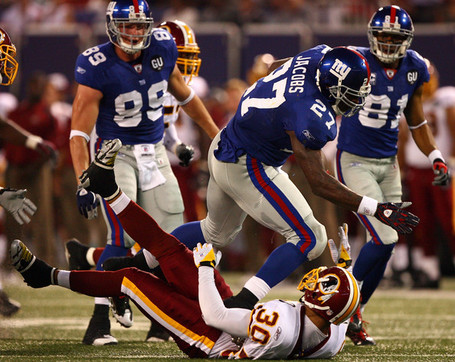 LaRon is back at it again - not necessarily doing anything wrong, but rather expressing his optimism for the safety's role in new defensive coordinator Jim Haslett's 3-4 scheme. I guess he's saying all the right things and really only doing what every professional football player tries to do this time of year: inspire hope. But it still rubs me the wrong way for whatever reason. Via Redskins Insider:

Landry, meanwhile, continues to voice his excitement about playing closer to the line of scrimmage this season. The 2007 first round pick has bulked up this and said he was excited about playing for defensive coordinator Jim Haslett, whom he watched as head coach of the New Orleans Saints.

Landry would give few details about his role or how much he might be involved in blitz packages and a more aggressive scheme.

Again, he hasn't said anything wrong, but it still gets my goat. I can just picture LaRon with an unimaginably obnoxious grin on his face preaching about how this year will be different. And call me a pessimist, a jerk, or a douchebag, but until he actually proves it on the field, he will be nothing more than draft bust in a body builder's body to me.

And, just for funsies, I google searched "laron landry tackle"