In one day, John Wall will be made the first overall pick in the 2010 NBA Draft by the Washington Wizards. But that's not official yet. Until then, Wall's got several stops to make, all of which we'll be chronicling here.

The first of those stops?  A small downtown club on West 41st Street, where he officially unveiled his new Reebok signature Zigtech Slash shoe to a small group of assembled media and others.  The shoe is build in the same way Reebok's famous Zigtech shoe line is built, but it's a basketball adaptation.  Basically, Zigtechs for basketball. 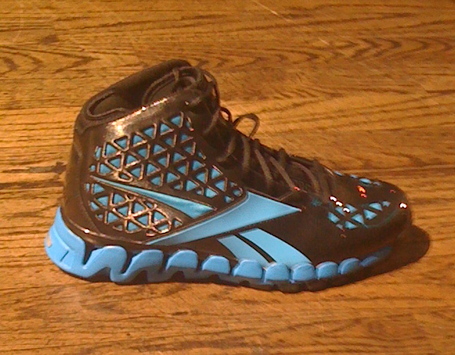 "Most other shoes, they have air and comfort, but if you press down, the air doesn't do much," Krinsky continued. "This actually channels the air back into the athlete."

Wall noted that the color - blue - is not an accident (it's Kentucky's colors, and Wall also said he has a model in the colors of his high school team). When asked to pitch his shoes, he told everyone to just give Reebok a chance.

"Some guys are going to pick Nike, but I feel like you [should] give every shoe a chance.  I gave Reebok a chance [because] they gave me a chance to go to their camp.  You should try this shoe out.  If you don't like it, you can buy another one."

It's that line about Reebok's camp that helped pull Wall to Reebok, a forgotten player in the shoe market that, in Krinsky's own words, had been focusing on "grounding [itself] as a training and fitness brand right now." Back in 2007, Wall burst onto the national scene by dominating Reebok's Breakout Underclassman Camp in Philadelphia. Both parties remembered how much that opportunity helped make Wall who he is today, and when Wall officially declared for the 2010 draft, Reebok was quick to move in.

"Everybody's going to come at you and give you these kind of opportunities, and I felt like these people gave me the opportunity to wear their shoes when I was in high school and their camp," Wall said. "So I felt like I should do them the same. They gave me this opportunity to sign with them, and I did that, and I thought this was the best choice for me."

Wall said he listened to sales pitches from Nike and other companies, but decided he wanted to take his own path. Luckily for Reebok, they were on the same page. Krinsky told the assembled crowd that they had several chances to go after other NBA players over the years, but decided that Wall was the guy they wanted to make their grand entrance back into basketball. They even had Iverson contact Wall and speak to him personally to try to sell him on the idea of being his own brand at a new company.

"John has what we call in our business the "triple threat," Krinsky said. "He's an explosive player on the court, but he's one of those players that always has the ball in his hands. He's very much a floor general, a cool leader. So he has a very aspirational game to young players, in the sense that he's flashy and exciting. Secondly, I think he's a great athlete, away from basketball, he's just a great athlete. We're a training brand, so we can use him in a training context, we can use him in a basketball context, and then we can work together to use him in a lifestyle context as well, because we feel like what separates him from other players in the league and other players coming out is that he has a cool demeanor, a cool off-court swagger to him, so we feel that over time, we can work together on some lifestyle collections as well."

Add it all up, and it makes sense that Krinsky greeted the crowd by saying "John has really been a part of the Reebok family, but today, we make it official."

Reebok also unveiled their brand-new commercial for Wall's new signature line. It will air during tomorrow's NBA Draft, but here's a sneak peak.