Greivis Vasquez: 'I'm Not Going To Let Memphis Down'

Share All sharing options for: Greivis Vasquez: 'I'm Not Going To Let Memphis Down'

You knew something good was going to happen to Greivis Vasquez when, suddenly, the Venezuelan flags started flying in his section. There were other players sitting near Vasquez that got drafted tonight, but none did so with as much noise as Greivis.

Once it happened, the group screamed, cheering the pick like no other pick made all night. And as Vasquez made his way up the podium and back to the media room, he had trouble wiping that smile off his face.

"I love the fans and my family and everybody cheering for me. That's something that I do appreciate a lot, and I'm thankful about that. I will never let the fans down, and I was very thankful and I was shocked. I mean, the fans were rooting hard for me, and that means a lot."

But it wasn't just about the fans tonight, because Vasquez is going to a pretty good situation for him. The Grizzlies are thin at point guard, with just Mike Conley and Jamaal Tinsley in front of Vasquez. With O.J. Mayo also there, Vasquez may have the chance to play in tandem with another combo guard.

"I think the Memphis Grizzlies are really going to give me an opportunity to develop my game. It's not going to be easy, and I have to work extremely hard, but I'm just thankful."

Vasquez also made sure to thank several other factors - his time at Maryland, his native Venezuela ("right now, we have a lot of baseball players, but only one NBA guy") and the fact that he played all four years in college ("This is a fact: your decision-making is a lot better"). Oh, and the fans too. There were several running around in Greivis jerseys. 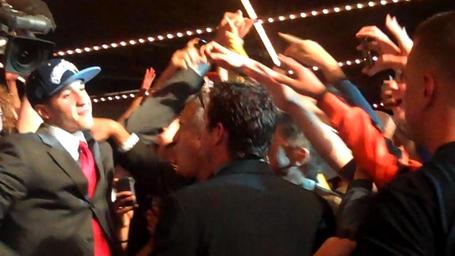 Local Players At The NBA Draft: Monroe To Pistons, Sanders To Bucks, Vasquez To Grizzlies