Welcome to Talking Points, where each week I will run down the stories that made the biggest splashes in the blogosphere last week and will tell you what to keep an eye on for the week to come. Last week the Washington Wizards and Capitals both had their drafts, the Redskins kept on preparing for the season and the Nationals continued their slide into the basement of the NL East. Let's start the column.

Well, we all know what the biggest news of the week was. If you don't then you really must read this entire column. John Wall getting drafted takes the top news spot this week. There was much celebration, appearances on morning television shows and TONS of signs plastered all over Verizon Center for the new franchise player. There's nothing but good feelings and optimism ahead for the young guard. Lets hope that it isn't too much too soon for him.

As great as fans are feeling about the selection of Wall, the opposite is true for what the Wizards did with the rest of their picks. The general sentiment is that despite having multiple picks in this draft, the Wizards blew it with all but the first pick. I even said as much in a Half Smoke column.

Picking up Kirk Hinrich, a second-string role player at best, who is getting paid $17 million over the next two years, seems to be an unwise move. Killing the team's cap space for a guy who should play good defense and mentor Wall just doesn't seem like an effective use of the team's salary. The other players drafted are projects or offensively limited as well. Seems to me like the team only wants to rely on Wall, Arenas, Young and Blatche to score next year. Let's hope that will be enough.

Speaking of Andray Blatche, he broke his foot on Friday. He'll be back in three months. Hopefully this won't set back any of the progress that he made late last season, if not then the curse continues.

So what's the culprit here? Is the team finally starting to pay the price for riding Tyler Clippard's arm so hard? Clippard took the loses for both Friday and Sunday, so maybe its time to get Jim Riggleman to give the kid a break now and then?

The team's defense could also take a lot of blame for their recent struggles, especially in the game Friday. Besides Nyjer Morgan's insane catch that evening, there hasn't been much else to write about in recent weeks about the Nationals' defensive play.

Oh, and surely someone else on the team has to start hitting besides Ryan Zimmerman, Adam Dunn and Josh Willingham.

At this point the Nationals have to consider themselves sellers on the market and begin to break up this team. The season started out with some fantastic feel-good moments, and Stephen Strasburg is amazing to watch, but any pieces who aren't going to be here for the long term need to get pawned off to the highest bidder as soon as the All-Star break is over.

Mini camp is over, no more trades have been announced and the Redskins now relax after a flurry of off-season activity last week. So guess who is back in the spotlight? THATS RIGHT! Albert Haynesworth is your top Redskins news story yet again.

This week, Big Al has promised to show up to training camp and stated that he is done talking to the media (via press releases of course, not actually, y'know, speaking). So, this proves that Haynesworth will do anything for money because you have got to be sure that Mike Shanahan is going to make his life a living hell during Redskins camp -- and Haynesworth has to know this too. Good luck, Albert.

In other Haynesworth news, an ex-wife, a stripper, a bank and some unpaid engineers are all coming after him in court for some of that money the Redskins have given him. He's settled a couple of them, but there are a few more yet to go before he is completely off the hook. Deadbeat dad, deadbeat football player, loan defaulter, this guy really doesn't like to do anything that he doesn't want to do does he?

Did you ever think it was possible that Albert Belle could lose the title of dumbest athlete named Albert? It might happen if Haynesworth keeps this up.

The Caps also drafted this week and they picked up a few more Russians to add to the team. Top pick Evgeny Kuznetsov won't see the ice here in America any time soon, but he looks like he could be quite a player when he does arrive in a couple seasons. If you don't like to click on links I will sum it up for you: he looks like he could be just like Alexander Semin. That ain't so shabby.

Sadly, the team didn't draft a defenseman until the 176th pick in the draft, and he's more of an offensive defenseman than a grinder anyway. With such a glaring weakness in the team's make-up, you would think they would attempt to address the deficiency at some point. I guess "best player available" isn't a horrible way to draft but I'd still like to see more attention paid to the other half of the game.

I can only assume that the Capitals believe they can trade for defensive-minded players or get them on the cheap in free agency, and because obtaining scorers cost teams a premium, it is better to just draft as many of them as possible to use as currency or to keep the offensive assault going on the ice. That's me giving the Caps the benefit of the doubt there. Let's see what happens during free agency. We need some defense. 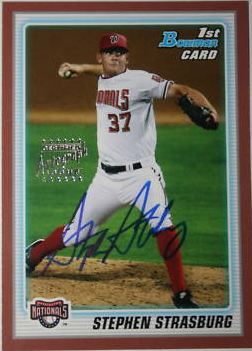 Obviously I have to go with Stephen Strasburg's autographed 2010 Bowman rookie card this week. Sure the starting bid is 99 cents right now, but one look at the insane bid history for this item tells all. Before all these bids were retracted, people were bidding up to $999,999.99 for the card. Obviously, there was some shenanigans here. Once the Internet was alerted to how much this card was going for, I think people decided to have some fun with it. Look at what our own site was saying when the price jumped from the tens of thousands to nearly a million. Pure freakout right there. So now, if you really are interested in this card, email the owner and he'll let you have a final shot at obtaining this rare Strasburg rookie card for whatever price you want, so long as it is the most offered ... SUCKERS!!

I cannot tell you how much I loved that Onyx song when I was a kid. I also particularly liked the Biohazzard remix of the song. Rap-rock at its finest, if there is such a thing. Shoot me an email at bjpsbnationdc AT gmail DOT com and let me know what you think about this, anything I wrote, or whatever is on your mind.

Reminiscing about music is a wonderful thing. This past weekend, whilst indulging in some fine alcoholic beverages, myself and a friend abused my favorite bar's jukebox by putting on several 80s power ballads and crotch rock songs in a row. This music was totally opposite the indie friendly and ever modern hip hop mix that usually is blasting on a late Friday night and it felt great.

Back in my younger, angrier years I would take over a jukebox in the worst way. I am a huge metal music fan and I would subject the entire bars to solid 45-minute blocks of loud, angry, thrash metal like Sepultura, Anthrax, Meshuggah or whatever. Just whatever I could to head-bang and watch hordes of people get pissed. Bartenders must've hated it, but I loved didn't. It felt great.

Taking over a jukebox with whatever music you want is a fantastic experience. The only thing wrong with it is when someone else takes it over with whatever crap music they want to play and it forces you to either drink more or dig in your pocket and return fire. Usually both. Either way, it doesn't feel great. Whomever you are that puts the 20 minute Grateful Dead songs on in a jukebox you know who you are...stop it.

Yes, I know I am a hypocrite but this is the general rule of the jukebox. Your music is always awesome, others suck. Unless someone plays something that you were going to play but you forgot about, then, you've got yourself a new friend.

So, I urge you, take over a jukebox sometime, play a 30-minute barrage of the music from your past. It feels great. Just don't do it around me, unless you play what I think is good.