Mystery Man Attempts To Distract Stephen Strasburg From Behind The Plate

Share All sharing options for: Mystery Man Attempts To Distract Stephen Strasburg From Behind The Plate

if you watched last night's Nationals game, then you know exactly who I am talking about when I say, "that guy who was sitting behind home plate." This guy, whoever he was, waved his arms around during each pitch made by Strasburg, in what appeared to be an attempt to distract him. Now, people want to know who that guy is. Picture and curiosity via Hardball Talk. 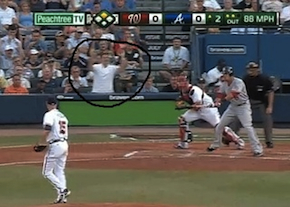 More on Atlanta's mystery fan after the jump.

My guess is that, due to where those seats are, he's someone rich, glamorous and important like, say, the son of TV weekend weather guy. Maybe a non-equity partner at mid-range law firm using the managing partner's tickets. Possibly a big-wheel latex salesman. As for motivation: I'm guessing he was either interested in distracting Strasburg, attracting lady-folk or breaking the record for the most Bud Lights consumed on a Monday night (Atlanta division).

I'd go with a combination of the weather guy thing, and the Bud Light thing.

The tolerance for a fan doing this kind of thing depends completely on where they are sitting. If a guy is in the upper deck, he can yell at the opposing players until his voice is sore, or until the other patrons in his section have had enough.

But this guy was sitting behind the plate. Simply put, you can't do this if you are sitting there. I am not saying that it had any effect on the pitchers, because they both seemed to pitch well; but because of where he was sitting, it was certainly a possibility.

Baseball parks have put up that neutral backdrop behind the pitcher because the moving crowd can interfere with the batter's view of the ball. A guy sitting behind home plate is no different for a pitcher. Wave your arms a few times, and it's amusing. More than that, and you start to become a legitimate distraction. Again, it didn't seem to affect this game, but there really isn't any room for that kind of thing.

Bob Carpenter said it best during last night's broadcast, "You're in a $300 seat. Act like a man."