Musings Of A Divorcee: Why This Fan Left The Orioles For The Nationals

For some fans, the switch was easy. For others, not so much. Alex Reed details how, when, and why he defected from the Baltimore Orioles to the Washington Nationals.

Share All sharing options for: Musings Of A Divorcee: Why This Fan Left The Orioles For The Nationals

Call it what you will, but today, after 23 years of marriage, I think it's best we call it quits and split the sheets.

It was a roller-coaster ride, Baltimore.

We had some fun times. I'll never forget Rex Barney's magical "give that fan a contract" call, being elected fan of the game in 1997, or my first taste of Boog's Barbeque a few years later.

And let's not forget how crazy things got against the Mariners at Camden Yards in June of 1993. I popped my MLB brawl cherry that day:

But lately, you and I have drifted apart. I suppose you could say it's been a long time coming, but I had always held out hope that miracles were possible, that one day all the bickering and disappointment would wash from our memories as we marched down happy lane toward a World Series championship.

Alas, the real world is a cold, unforgiving place. I'd like to give you the, "It's not you, it's me," but if brutal honesty is my goal, then let it be said: It's you.

Sure, there are countless third parties you can point blame at: Jeffrey Maier (pictured below), the AL East, Mark Teixeira becoming Judas Iscariot reincarnate, etc. 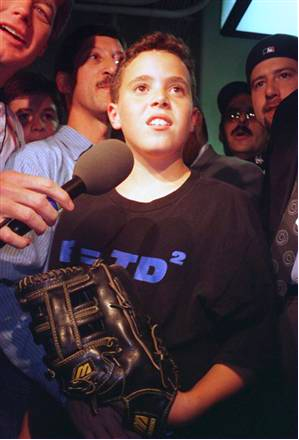 But in the end, you have nobody to blame but yourself. For years, you underachieved, you blew saves in the ninth inning, you fired Davey Johnson and then Ray Miller, you didn't make the playoffs, you promised that "this year" would be different, you conned me into believing in you after a hot start, only to crash and burn in the worst way imaginable down the stretch.

I tried, I really did. When the Washington Nationals moved to town five years ago, I remained faithful. I'll admit, I went to a few games - hardly cheating. But I never once cared for them more than I cared for you.

That is until now.

I suppose I reached my breaking point when I read Thomas Boswell's column in this morning's Washington Post. In it, he described the tale of two teams headed in opposite directions.

For the Nats to match their nadir last season at 26-66, they would have to lose their next 39 games. That's hard to believe. But for the O's to get to 26-66 this year, all they have to do is keep playing exactly as they are. That's even harder to fathom.

It occurred to me: why exert all my emotional energy on something that is not making me happy and will not make me happy because it can't make me happy. You, the Orioles, are inevitably doomed for the foreseeable (45 of the next 48 games against teams .500 or better) and unforeseeable (next season and beyond) future. The Rays' success has given us hope, but I've now learned that hope alone can only take us so far.

So, Baltimore Orioles, I regret to inform you that I am leaving you for the Washington Nationals. There is no turning back, either - nothing in this world can stand in the way of my new love affair.

Goodbye, Nick Markakis; hello, Ryan Zimmerman. I'll never forget the countless debates I had with friends in the summer of 2008 about who was a better franchise cornerstone. I believe that argument can be safely - and laughably -  put to rest at this point.

Goodbye, Matt Wieters; hello, Bryce Harper. I still wish you the best, Matt, and hope you reach your potential. But there's a new best catching prospect ever, and he will most likely be a part of the Nationals organization before you even hit your fifth home run on the season.

And lastly, for kicks: Goodbye, Dave Trembley. You're on the verge of a well-deserved severance package.