Team logos are great because they inspire a series of emotions all by themselves. So what are the best old-school team logos in D.C. sports history?

I was recently driving south on I-95, and there it was in all of its glory: 11 individually-boxed black letters set on yellow that make me almost always pull over at the next stop. Waffle House, my mecca, beckoned to me with that familiar logo to make bad decisions.

I once spent the night in an emergency room after ordering what in retrospect was an obnoxious amount of Grade F breakfast meat. It didn't help that I doubled down on the waffle and went smothered, covered and diced on the potatoes (extra crispy of course). So when I say that Waffle House put me in the hospital once, I mean it literally put me in the hospital. I was rushed to the emergency room where I was informed that my system was completely stopped. They showed me X-rays. It was as close as I will ever come to experiencing what expecting mothers go through when they see the first picture of that baby in their belly. Except instead of a little peanut-sized fetus that barely resembled a human being, I was looking at what I will swear to my deathbed looked like a completely unchewed sausage link.

But I can't stay mad at the Waffle House. If I pass that logo on the road, you better believe I am trying my damnedest to build some Waffle House consensus in the car.The hospital stay is my ace in the hole. After all, if I still want to go to Waffle House after that night of terror, what in God's name is your excuse?

That got me thinking--what sports logos over the years have the same kind of effect on me, and on us all? What are the best old-school D.C. sports logos? Here's my list.

(I am preparing to get killed this week ... this list is my most subjective one to date.)

This is the helmet I want the team to bring back. The block "R" on the gold helmet looked amazing when they wore it a couple years ago (Sean Taylor's last season). Did this helmet always stand for the greatest brand of football being played in the NFL? No. God, no.

But if Bruce Allen wants to tap that retro feel for his new look franchise, this helmet is a no-brainer.No offense to the Indian on the side of the current helmet, but this throwback look could get very comfy in this town. Even if we couldn't get into the end zone from the goal line (twice) against the Giants while wearing these jerseys.

We know that Uncle Ted is not going to change the name back, but something about those hands reaching for the sky -- uhhhh, I mean ball -- makes me yearn for the days of Tom Gugliotta and Pervis Ellison. The Wizards logo, color scheme and mascot have never been able to recreate the feeling that the old-school Bullets colors and logo gave us all. Sure, it inspires images of futility and losing, but it just feels more right under this banner, doesn't it? 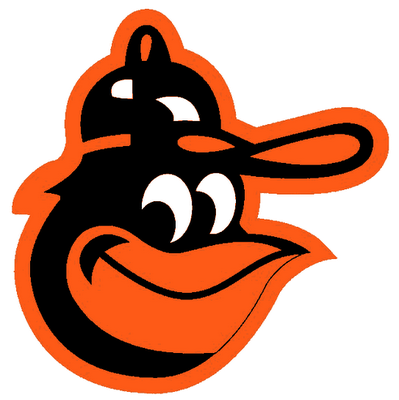 I know that Baltimore doesn't like to associate itself with D.C. these days but as a native of the area, how could I deny the roots we all share? The "Oriole Way" stood for building a team and a franchise the right way. When I see this logo, I think of listening to games on the radio while sitting on my couch in the yard in front of my dorm. Memorial Stadium, Earl Weaver, Cal Senior. It doesn't get much better.

If I wasn't trying so hard to get the Skins to bring back the gold helmet with the Block "R," this would have a shot at  number 1. 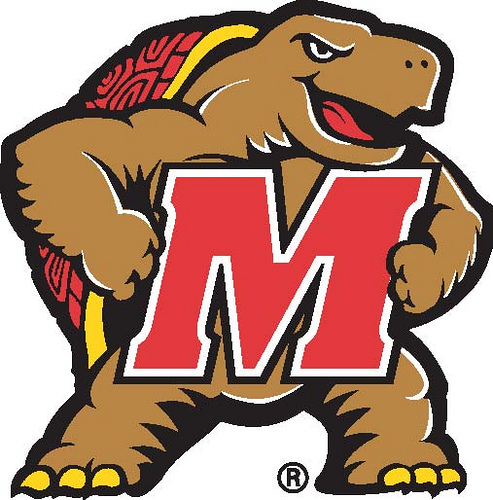 There are many cool aspects of college sports around the country, but the saying "Fear the Turtle" is up there on the coolness scale. I remember as a kid wondering what the hell that was supposed to mean. I watched countless football teams take the field at Byrd and get smashed. I remember the lean years before Gary Williams came back and restored the Terps to national prominence on the hardwood.

To me though, when I see this logo, I remember watching that National Championship game featuring Juan Dixon and company. I think it is fair to say that Jared Jeffries and company "Fear the Turtle." 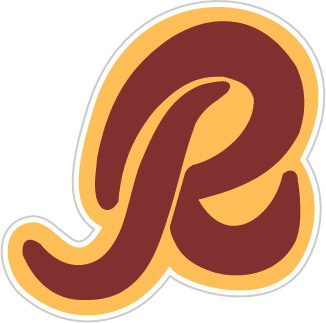 While this is not the logo I favor them returning to over at Redskins Park, this one definitely invokes some great memories. When I see the old Curly R (nod to my friend Ben Folsom), I think of mesh hats and younger versions of the entire Redskins Coaching staff from 2006. To me, this logo screams Joe Gibbs, Joe Bugel, Richie Petitbon and Lombardi Trophies.

What are your favorite old-school D.C. sports logos? Tell us in the comments section.