Varsity News Kicks off its summer interview series with Old MIll's Damian Ferragamo, who led the Patriots to last year's Maryland 4A state title. Also, Quinn Cook is Leaving Dematha, what a bummer.

In 2009, the Old Mill Patriots and head coach Damian Ferragamo leaned heavily on their star running back Josh Furman (who can be seen on coach's back in the picture to the right); and he always came through. Heading into last year's 4A state championship, the future Michigan Wolverine had run for a cartoonish 2,271 yards (including 615 in the previous two state tournament games) and (gulp) 36 touchdowns. The kid is kind of a game-breaker is what I'm trying to say.

So when The Patriots lined up against Wise in the state final, everyone in the building expected a similarly-dominating performance by Furman. But he was only able to record six carries for 12 yards before a knee injury forced him to the sideline early in the first quarter. It had to be a nightmare scenario for Ferragamo. They made it to the fight, but would now be without their best weapon. If that was me, I probably would have handed my headset to one of my assistant coaches and calmly showed myself out of the stadium to my car, where I would have eaten an entire sleeve of double stuf Oreo's and enjoyed a good solid cry.

But luckily for Old Mill and their fans in attendance, Ferragamo is a more composed man than me. He just handed the ball to Jason Clements, Furman's fellow senior running back, who had rushed for 1,144 yards and 16 touchdowns that season in his own right. Clements responded with 167 yards on 40 carries, and Old Mill emerged with a heart-stopping 17-16 victory, the school's first state title.

The Old Mill Patriots will enter the 2010 season with a shiny new target on their backs, the one reserved for defending state champions. We reached out to coach Ferragamo to be the first in our summer interview series, and he was kind enough to oblige. So without further adieu, Varsity News' interview with Old Mill head football coach Damian Ferragamo:

-Of course we need to talk about the state title last year. What did that mean to the program?

The Championship meant a lot to Old Mill and Anne Arundel County. We play great football in our county and have received very little respect from the rest of the state because no one could close the deal. As far as our program at Old Mill it was validation that we are doing things right. We can look at what we did to reach that level and use it as a platform to improve our program.

-How do you stay motivated after a season with so much success?

It wasn't hard. There is no feeling like when the clock hit all zeros. When you have that experience you will do anything to have it again.

-Do you compare your teams from season to season? If so, than how does this team compare to last year?

We try not to compare teams. Every team is special and deserves their own identity in the history of Old Mill. I do believe we are just as athletic as we were last year and have an opportunity to be very successful. We graduated all but 6 touchdowns and almost all of our yards from scrimmage but there are young guys waiting for their turn to shine. 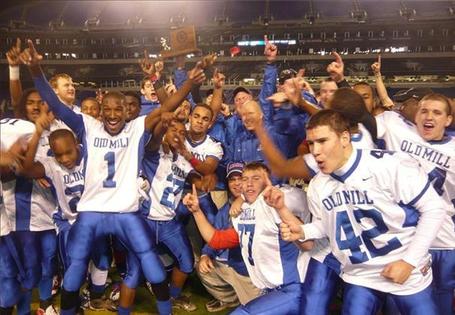 -Do you think this team can improve from last season? If so, how?

I think there is a lot of room for improvement from last year. We can be a more balanced offense that relies on several weapons instead of just 2 or 3. Defensively we can approach every play with more intensity. We had a tendency to play to our competition on occasion and that isn't a quality of a great program.

-What are your expectations for this season?

I expect to win every game we play. Of course I have expected to win every game I have ever coached in and that hasn’t happened yet. We have the talent and ability to beat every team on our schedule but that doesn't mean that is going to happen. Our overall regular season goal is to get in to the playoffs. If you get in and get hot you can win it all.

-What players are you looking at to take the next step this season?

Deonte Shields, our projected QB, needs to develop into a leader. He has the ability to be a good player but the QB position requires something more. There is no way to know if that is going to happen until he faces adversity in a game & you see how he reacts. Demond Brown & Rob Chesson will carry most of the load running the ball and we expect big things from both of them. On offense we are counting on 3 returning offensive lineman to be the foundation of what we do. Alex Dembinski, Corey Bealle, & David Lee should pave the way for 2 very good running backs.

Defensively we are expecting our returning starters Avery Taylor, Seth Holbrook, Raff Kess, and Joe McCargo to create big plays with their athleticism. We are not very big but our speed more than makes up for it. We have some young size that needs to step up and give us some run stopping ability. 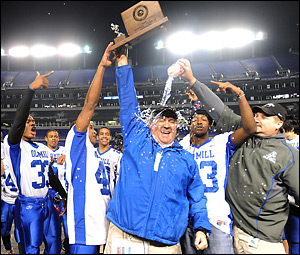 -What do you think will be crucial to the team's success this year?

Continuing to do what got us to week 14 last year. We outwork people. If we look backwards we will get what we deserve when we play the top programs in Anne Arundel County. I don't believe anyone works as hard as we do in the off-season and if everyone buys into our program we will be successful.

-What are you and your staff trying to focus on improving this off-season?

We are going to focus on basic fundamentals like we do every year. There are no magic plays in football. The team that blocks and tackles better usually wins.

-How will the team be different this year than last?

This team lacks the big name player. I think overall we are just as talented but it is spread out more evenly. 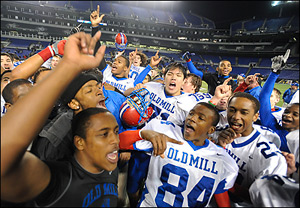 -How will you measure success in the coming season? Is it state title repeat or bust?

I don't think you can measure success by a state title. Only one team will win it and it takes a lot of luck at the right time to get through a tough schedule and play-off competition. We think we should be in the mix again this year. If we play good football and develop as players and people you have to consider that success. We will be disappointed if we do not make some noise in the playoffs but to hang everything to a state title isn't fair to this group of players. The state is full of great teams that never won one.

-Is playing at M&T Bank Stadium a good source of motivation?

Of course it is. The look on the player’s faces walking through the tunnel is something I will never forget. It is a great venue for high school football especially with the following we have.

-What's it like to be the coach at a state title winning program? How are you received in the community?

I have to admit it is pretty cool. My entire family was very excited and I can't tell you how many times I have been introduced as "The 4A State Champ Coach." It feels good that all the hard work is now being recognized but I worked just as hard when I went 1-9 my first year as a head coach at Parkdale High School. The Old Mill community has been great and I can’t thank the student body enough for all their support. I'm glad I was a part of something that the entire student body got behind and enjoyed. The bottom line is we were and are blessed with pretty good football players. As coach we do our best to put them in the right spots and develop character. With or without a State Championship I am proud to work with the kids I have.

Thanks to Ferragamo for taking the time to answer our questions.

Remember a few weeks ago when we named Quinn Cook the Varsity News player of the week? This is a direct quote from that article.

With another year of eligibility left at Dematha, I'm sure this will not be Cook's only appearance as the Varsity News player of the week.

Apparently, that will be his only appearance because Cook is transferring to Oak Hill Academy, the basketball powerhouse in Mouth of Wilson, VA. Way to make me look like a jerk, Quinn.

But actually, this is a good decision for Cook. While Dematha is a fairly recognized basketball program on the national level, Oak Hill makes it look like elementary school by comparison. You can't throw a rock in an NBA locker room without hitting an Oak Hill graduate. (Not that I would recommend doing that. Those be some big dudes).

"He's become a celebrity here and a lot of people want his attention. As a 16-year-old kid, to be as popular as he's become, there's been some difficulty. The one thing I want to be clear on [is] that this has nothing to do with academics. This is not a basketball move either. No offense to Oak Hill, [but] he's not going to get anything there that he can't get here. This is about getting properly focused."

There's going to be a lot of basketball fans in the area who are going to miss the reigning All-met player of the year, including yours truly, but it seems like the right move for him.