So Hey, Anyone Else Want To Go To The Nationals Game Tonight?

Share All sharing options for: So Hey, Anyone Else Want To Go To The Nationals Game Tonight?

No plans on Friday night? Not much money, because you ate out too much and dropped a ton of cash on all your partying last weekend? Desperate and willing to try anything to have a good time?

Well, don't worry, because we have some good news for you! You can come to tonight's Nationals-Reds game (which was supposed to be Stephen Strasburg's debut before the Nationals changed their plans) for a bargain price! How much of a bargain? You won't believe your eyes!

But wait, there's more! Click below the jump to see! 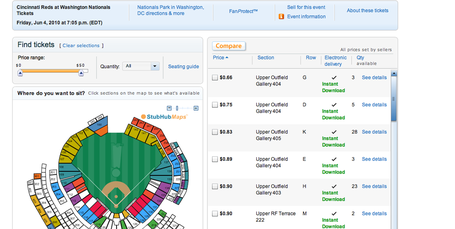 (That's a screenshot of Stubhub at approximately 4:15 this afternoon. Click to enlarge).

Yes, that's right, you can get an outfield bleacher seat for as low as 66 cents. Sixty-six cents! That's 1,000,000 percent off the cover price (slight exaggeration). But don't wait! Click today, because these tickets are going fast!