A Reason To Believe, From Redskins Players Themselves

After 20 years of heartache, I've seen enough. No longer am I willing to get suckered in and automatically believe the Washington Redskins are just one move away from returning to glory. If this year is going to be different, I needed to hear it directly from the players.

Share All sharing options for: A Reason To Believe, From Redskins Players Themselves

When I was a baby, my parents put me in Dallas diapers so I could properly "decorate" the Cowboys’ logo.

So yeah, I’ve been a diehard Redskins fan since the day I was born.
The fact that the ‘Skins won three Super Bowls by the time I turned 14 only furthered my love for the burgundy and gold. Even worse, I was convinced that’s how it would always be. The Redskins running up the score on whoever was foolish enough to oppose them on Sundays.

But a funny thing happened along the way. The team I that knew and loved began to change.

Wins were no longer automatic. The high-powered offenses and all of the memorable halftime adjustments slowly faded away and were replaced by nightmarish images of Gus Frerotte headbutting a wall. Or a homophobic Michael Westbrook beating Stephen Davis senseless. Or the Heath Shuler era.

I grew up with players who seemed larger than life. Guys like Art Monk. Gary Clark. John Riggins. Joe Jacoby. Russ Grimm. Dexter Manley. Charles Mann. Darrell Green. I could go on and on.

No more bandwagon. No more Hogs or Fun Bunch. Even when Joe Gibbs returned to our lives, it wasn’t the same. I finally had to admit to myself one sad truth – the Redskins, as I knew them, were dead and gone.

And yet, here’s the thing: Every summer, right around June or July, I begin talking myself into believing.

Despite the fact that inept leaders such as Steve Spurrier and Jim Zorn were calling the shots, I’ve always found a way to con myself into thinking this year would be different.

Whether it be another aggressive free agent signing, a highly-touted first-round pick or some other splashy move from the offseason champs, every year I convinced myself that the Redskins are on the verge of returning to glory. Or at least relevance.

Twenty years of playing the fool has finally jaded me. And after suffering through the especially dysfunctional maroon and black era, I refuse to drink the Kool-Aid a minute longer.

Even though the organization has done everything possible to sucker me back in with the addition of general manager Bruce Allen, head coach Mike Shanahan and quarterback Donovan McNabb, I refuse to buy into the hype.

If things are going to be different this season, I need to hear it first-hand. So I went out to Redskins Park to ask a few of the players one simple question – after 20 years of heartache, why should I believe this season will end any differently?

"I mean, if you’re a true fan, you should believe anyway," cornerback Kevin Barnes.said. "But honestly, we’re under the radar right now. A lot of people don’t expect much from us based on our 4-12 season last year. But if you look at the games we lost last year, how many times did we get blown out? We were in every game until the very end.

"Coach Shanahan and his staff have come in with a great scheme offensively and defensively," Barnes continued. "That’s going to make a difference. People are going to be surprised when we take the field for that first game against the Dallas Cowboys. I don’t want to say too much, but our true fans are going to be rewarded for sticking with us."

Did Barnes just question my Redskins loyalty? I’m pretty sure he grew up a Dallas fan, so I figured I should find a second opinion.

"You can’t tell a whole lot in these camps and OTAs because we’re in shorts and stuff, but the thing I love is the work ethic of this team," center Casey Rabach said.  "We all come to work every single day – offense, defense and special teams – and we’re working our butts off. I think that’s going to pay huge dividends down the road. We’re putting the work in and we’re going to keep on pushing forward."

Last I checked, 31 other teams are holding offseason workouts too and no one has come out and said, "Our minicamps are a joke." Besides, even Taylor Jacobs looked good playing football in shorts.

"Just look at the way everyone is working," safety Chris "The Predator" Horton said. "That goes for offense, defense and special teams. We’re working a lot better. I’m going into my third year, and this is the hardest I’ve seen us work since I’ve been here. We’ve got a good coaching staff and we’ve got guys who are willing to put the time in, do the work and do whatever is asked of us. I think we’re gonna be alright."

A second vote for "we’re working harder than ever." Call me crazy, but I’m starting to think that slip-n-slides and dodgeball games are great for bloggers, but not so much for preparing a football team.

"I just really feel like everybody is buying in," linebacker Brian Orakpo said. "I feel like last year, when times got tough, a lot of guys didn’t continue to believe. That’s why things went downhill. But I really think everybody is buying in to what Coach Shanahan and the rest of the staff are bringing in, and we’re trying to excel.

"I can’t really be the judge of your opinion, but everybody’s been here, setting aside their egos and really trying to do whatever is necessary to succeed this coming season."

Orakpo has only been in town a year and he’s already figured things out. In the face of adversity, the Redskins have been known to wilt under pressure. Not exactly an endearing characteristic, if I do say so myself.

"You should definitely be excited like you were before," tight end Fred Davis said. "I can tell you from when I first came here that it just didn’t feel like a team. Now, it feels like a team. Everybody’s participating in everything. Everybody’s treated equally. Everybody has to follow the same rules. Nobody can go behind the scenes and do whatever they want to do. Everybody’s doing all this stuff together, as a team.

You mean players aren’t allowed to run directly to the owner if their feelings get hurt? Say it ain’t so.

"It starts up top," wideout Devin Thomas said. "You see the discipline that Coach Shanahan commands and everything like that, and you can see the foundation being set. He keeps us in line and focused on what we’ve got to do.

"I know you’re always proud to be a Redskins fan, so I know that’s not an issue," Thomas continued. "But as far as the wins and losses, I know where you’re coming from. I can look you in the eye and tell you that it’s going to happen this year. We’re under the radar right now, and that’s the way we like it. That just means we can shock everybody and then they’ll all jump on the bandwagon because we’re winning. Those people can join the club, but we know where our true fans are. They’re with us regardless."

At the end of the day, the one notable difference that nearly every player I talked to mentioned at one point or another is the culture change. A year ago, things were so bad that Thomas often joked with me that D.C. stood for "drama city."

Now, all of the off-the-field distractions are gone and the only thing that matters is what players do when they’re on the field. There are no favorites. There aren’t separate rules for separate players. Everyone is held accountable for their actions.

It might not sound like much, but after years of underachieving and failing to live up to expectations, this might be enough to finally turn this once-proud franchise around. I don’t know about you, but that’s more than enough reason for me to book my reservations for Super Bowl XLV.

Besides, it’s going to be held in Dallas and I’d be more than happy to show the good people of Texas the proper way to "decorate" that star logo. 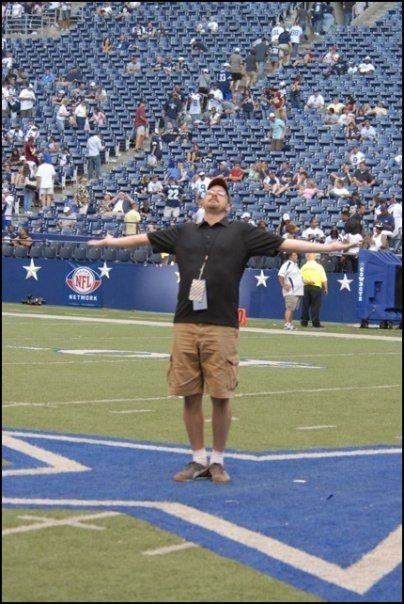