Some Facts About Stephen Strasburg's Debut

Share All sharing options for: Some Facts About Stephen Strasburg's Debut 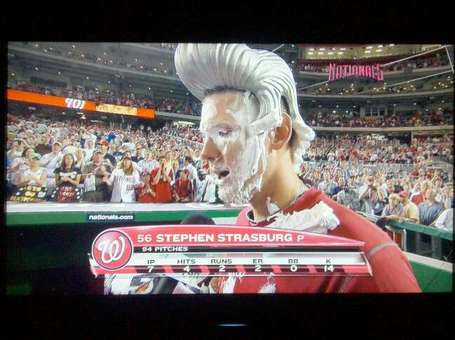 The man you see here with the silver Elvis wig on and shaving cream pie in the face (Via Jamie Mottram) is young mister Stephen Strasburg, fresh off his dominating performance in his first major league game. He had one of the most impressive first games of any pitcher in recent memory. Besides that, he also completed one of the best starts the Washington Nationals have ever had in the organization's short existence in D.C.

If you missed the game or think I am exaggerating a bit when I say how impressive and dominant Strasburg was, lets take a look at some of the stats that explain what I am talking about.

Stephen Strasburg threw 94 pitches Tuesday night. 58 of them were fastballs. They averaged 97.7 miles per hour. The slowest was 95.3. The fastest was 100.1. Nine of them were cut on and missed.

Stephen Strasburg threw 94 pitches Tuesday night. 25 of them were curveballs. They averaged 82.2 miles per hour. Five of them were cut on and missed.

Stephen Strasburg threw 94 pitches Tuesday night. 11 of them were changeups. They averaged 90.4 miles per hour. Four of them were cut on and missed.

A good major league pitcher will get about 11 missed swings of every 100. Strasburg had a stunning 18 missed swings among 94 pitches.

Compared to other rookie pitcher's first games, we go to Buster Olney again:

Strasburg first pitcher EVER to strike out as many as 14 in a zero-walk debut. Incredible.

He struck everybody out. Everyone in Pittsburgh's lineup struck out at least once...

And finally, from Dave Nichols @NatsNewsNetwork:

So, for summation purposes, in Stephen Strasburg's first start in the Majors, he set one Major League record (14 K, 0 BB in a debut) and two Washington Nationals records (14 K total and 7 K in a row). He was throwing more balls that nobody could get a bat on than most good major league pitchers can throw and in doing so struck out every batter in the Pittsburgh line-up at least once. He was averaging some insane speeds on all of his pitches, with fast balls topping out at over 100 m.p.h. and change-ups in the 90s.

The scariest thing about this start, I believe, is that his seven consecutive strike-outs were the last seven batters he faced, which means that he was getting better as he stayed out there. Yikes! Watch out opposing hitters!

That, in a nutshell, is our Stephen Strasburg. Maybe we should rethink our latest poll for who is the top athlete in DC because Strasburg might just be pitching himself into the top spot.