In this week's edition, we take a quick look back at Stephen Strasburg's high school career before recapping the week that was in local high school sports.

I make a living covering those still in high school, but as a human being in the District of Columbia, I have to talk a little bit about Stephen Strasburg, who made his debut Tuesday for the Washington Nationals.

The interesting thing about Strasburg is that he kind of came out of nowhere while he was at San Diego State. Even on his Wikipedia page, Strasburg's history only starts with his sophomore season with the Aztecs. Scouts usually know about the highest level pitching prospects for a few years before they graduate from high school, but it took Strasburg a season or two in college to develop into the No. 1 overall pick.

So I thought, in the spirit of Varisty News, but with a case of Strasburg fever, we would take a quick look at Stephen Strasburg's high school career and learn a little bit more about where the future of D.C. baseball came from. Because if Wikipedia doesn't even know this stuff yet, you might be able to convince people you didn't just become a Nationals fan last night. 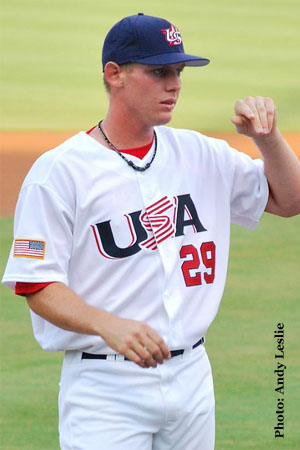 That's not high school, but that's what I'm saying; nobody knew about him. He still looks pretty young there so we'll take it.

Strasburg attended West Hills High School in Santee, Calif., where he spent three years on the varsity baseball team. When he was a senior he had 73 strikeouts in 62 innings pitched, and finished with a 1.68 ERA. (This is my favorite part) That year he was named second-team all-Grossmont League North. How competitive is the Grossmont League in California? Particularly the North division. The starting pitcher on that first-team all-Grossmont League North was somewhere last night throwing full beer cans at his television, cursing Stephen Strasburg and the future that was once his.

So Strasburg didn't just emerge from Tony Gwinn's shadow in the spring of 2008. He was actually a pretty good high school pitcher, but unfortunately became the poster boy for prospects that fall through the cracks. Scouts just simply missed this guy. I guess the moral of that story is to keep up that hustle even if nobody is watching right now because you never who will be.

So without further delay, lets get back to what you came for. The Virginia state title tournaments are starting to take shape, and many of the champions will be named by the end of the week. Here's the stuff you may have missed.

Performance of the Week: Langley Lacrosse 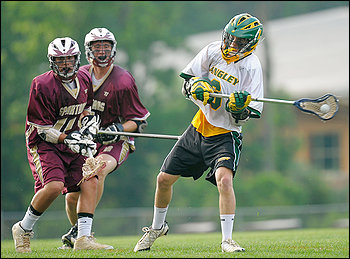 The Langley lacrosse team boasts a nearly perfect record and has spent the majority of the season atop the Virginia state high school lacrosse power rankings. But when the post season rolls around, everybody starts with the same records, and those rankings don't really seem to ever matter for that much.

So when the Langley lacrosse team found itself trailing big (relatively speaking) in its state quarterfinals match against Salem this weekend, it was a position they were not particularly familiar with. The Saxons could have pulled a Cleveland Cavaliers, which is what we're going to call it from now on when a team dominates the regular season than bows out quietly the moment they face even the smallest amount adversity in the playoffs, but they proved to be a much tougher out than these guys.

After facing a half time deficit of 7-4, Langley closed the gap to a more manageable 10-9 entering the final frame. By the middle of the fourth quarter, Langley had come all the way back and even held a singe goal lead. Salem then delivered one last potential knockout blow, tying it up 2:38 on a goal that would eventually send the game into overtime. It would have been easier for them to lie down after Salem had re-captured the momentum, but again, Mike Brown was no where to be found.

Langley scored with 2:16 left in the sudden death overtime to advance past Salem, and onto W.T. Woodson and the state semi-final on Wednesday (more on that below). Usually the performance of the week is reserved for the best individual outings, but when a team faces major adversity and handles it as gracefully as Langley did, they get the nod. 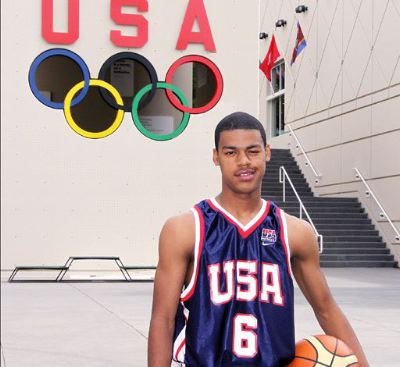 Before you say anything, I'm aware that this is the spring season (the end of it for that matter) and that basketball is a winter sport. However, Varsity News will not discount somebody that's making noise just because its the wrong month for their sport. If you're showing out, you're eligible for the Player Of the Week award; we're versatile like that. Which brings us to Quinn Cook.

If you follow basketball in the region (and how could you? Varsity News just got here), then you already know about Quinn Cook. The dynamic point guard just finished his junior season at DeMatha and has been labeled the next big D.C. basketball prospect for about two years now. In fact, he's already semi-officially eliminated Maryland from the list of schools that he is considering, which is how you know a prospect is getting big.

This week, Cook will take the first step in making his name internationally, as he travels with the US national team to compete in the FIBA U-16 world championships in Argentina. Here's what Cook had to say about the experience, via Seth Elkin:

"Right now I'm on cloud nine," Cook said Tuesday after a workout with the team at the U.S. Olympic Training Center in Colorado Springs, Colo. "It's one of my all-time dreams to put on a USA jersey."

I think its safe to assume that USA jersey Cook is referring to is the one that's worn by the members of the senior national team during the Olympics, but the Fiba U-16 championships are a pretty good place to start. Cook will return stateside in late June, and compete for his AAU team, D.C. Assault in tournaments all over the country for the rest of the summer. With another year of eligibility left at Dematha, I'm sure this will not be Cook's only appearance as the Varsity News player of the week. 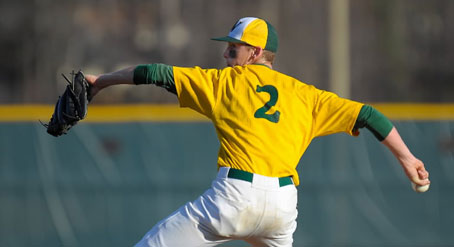 Nutshell Stat: Aren't You Paying Attention? I just said they were undefeated. That's as nutshell as it gets. Also, the +144 run differential doesn't hurt.

However it must be mentioned that for an undefeated team, Woodbridge sure has played an awful lot of close games, with four of the last six decided by just a single run. Their opponents will claim that makes them beatable,while their fans will say it proves their metal. We'll find out who is right when they play for the Virginia State title this weekend.

Marshall High School has hired Dan Hale as their new basketball coach. While you've probably never heard of either party, VN is covering this story because of Hale's relationship to one of DC's most famous residents. Hale played his high school ball with President Barack Obama at Punahou High School, where they won the 1979 Hawaii state title. Which gives us the opportunity to post this picture. 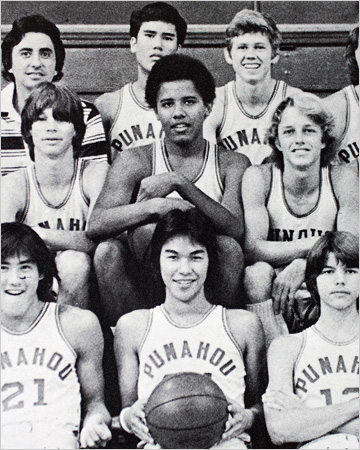 I'm not sure which one of those kids is Hale, or if he's even in the picture at all, but we know which one is Barack Obama, and that's all that really matters.

It took 13 runs, and a relief appearance by their ace, but Potomac Falls managed to hang on to beat Brentsville 13-10 in the Virgina Region II Baseball championship Friday. Sophomore Jackson Rodgers closed out the game, even though he was scheduled to start only three days after. Remember that scene in The Waterboy when Brent Musburger and Dan Fouts kept yelling, "Its the last game of the year, YOU CAN'T HOLD ANYTHING BACK"? I imagine the scene in the Potomac Falls Dugout was a lot like that before Rodgers took the mound.

This Week's Games To Watch:

We're going to focus on Virginia Boys lacrosse, the gem of the remaining title tournaments, because, well, its up to me and I say so.

After their comeback win on Friday, Langley looks to advance to the Virginia State title where they will face the winner of...