A Reminder: Stephen Strasburg's First Strikeout Was Against Lastings Milledge

Share All sharing options for: A Reminder: Stephen Strasburg's First Strikeout Was Against Lastings Milledge

Ah yes, our man Lastings. Once upon a time, he was a worthwhile reclamation project, the kind of prospect many Nats fans were excited to get for Ryan Church and Brian Schneider. But then, the Nationals made him a leadoff hitter, where he proceeded to forget how to hit. Throw in the, you know, bravado, if you will, and many Nats fans were cool with shipping him off to Pittsburgh, even if Nyjer Morgan is the guy the team got back.

I personally had forgotten about Milledge until last night, when he was the first of 14 players Stephen Strasburg struck out. One pitch, two pitch, three pitch, gone. It was awesome. And now, thanks to the Washington Post's Strasburg Pitch Tracker, you can relive that beautiful sequence of pitches again and again.

Below the jump, a screenshot, via this new amazing site (won't say the name, because ... yeah). 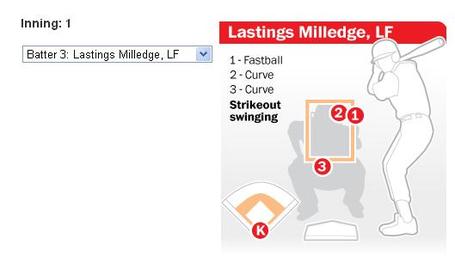