A Bunch Of People Try The 'Strasburger'

Share All sharing options for: A Bunch Of People Try The 'Strasburger'

DCIst's Sommer Mathis takes a bite out of the brand-new "Strasburger" currently on the menu at BGR The Burger Joint, one of several places that are now offering Strasburg-themed food. Her verdict?

The burger patty itself was juicy and cooked to a nice medium pink, but between the insane number of pickles and the hot dog, I could barely taste the beef. The Strasburger also suffers from structural integrity issues thanks to that tall stack of toppings. I was unable to finish before it started to fall apart, and, ultimately, queasiness began to set in, leaving approximately 6.5 out of 14 pickles left on the tray. That's not to suggest that those with more gastrointestinal fortitude might not have better luck than I.

NBC's Lindsay Czarniak also had one on the air, and while she said it was good, the pickle she threw at her co-host says otherwise. Picture below the jump: 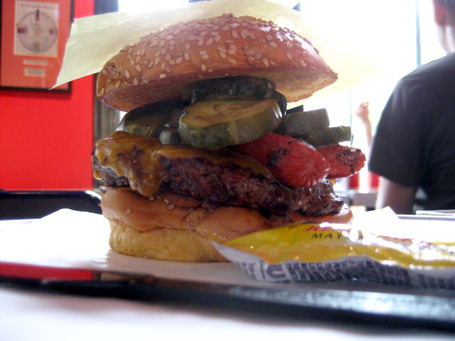