Clippard's ERA Is Going Up Faster Than The Temperature

Share All sharing options for: Clippard's ERA Is Going Up Faster Than The Temperature

If you've been keeping up with the Nationals lately, you've probably noticed that Tyler Clippard hasn't quite been the same pitcher recently. After coming out of the gates on a blistering start this season, the Nationals' set-up man has hit a bit of a snag recently. It reached a low point last night when Clippard gave up four runs in one-third of an inning. For those of you keeping track at home, that would have lead 108 runs if Clippard had pitched nine innings at that pace.

To get a better understand of just how bad things have gotten over the past few weeks and look at some different explanations for what's been ailing Clippard recently, follow me after the jump. 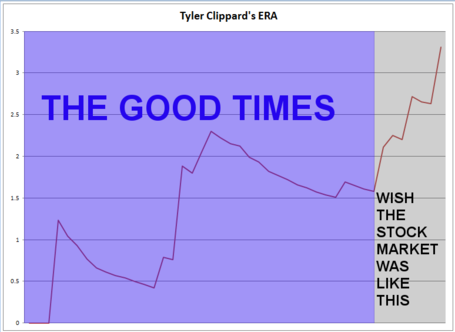 As Mark Zuckerman points out, Clippard's ERA has doubled since June 22, when it was 1.58. Now, after Saturday's debacle he sits at 3.31. Don't get me wrong, a 3.31 ERA still isn't bad, but anytime someone's ERA doubles in less than a month it's cause for concern. Nationals beat writers have some theories behind Clippard's slump.

The Nationals would prefer Clippard ease off the gas pedal a bit.

"Even though you throw harder, it doesn't make things better," McCatty said. "There's an area where you pitch better at. Because you're not overthrowing, you're locating your pitches better, it seems like the ball will jump out of your hand. But when you tend to power up when you're struggling, you open up, you leave the ball up and make some hittable pitches."

Clippard has actually been throwing the ball harder as of late, but that's not a good thing for him. He's been leaving pitches up and those couple extra miles-per-hour have straightened out his fastball, making it easier to pick up for hitters.

"For me, the type of pitcher that I am, my best stuff isn't necessarily 97 [MPH], whatever the case is," he said. "I've always been a guy who kind of needs to pitch - I'm a pitcher not a thrower. I need to work down in the zone."

"I have felt like I have been pitching really good and kind of hit a road block in the last couple of weeks. It is more of a mental wall in a sense of getting through it more so than anything else that is going on.

So what's the fix? The Nationals hope to avoid using Clippard on Sunday, and could put him in some lower-pressure situations for now. The luxury they have is Drew Storen, who's been tremendous since coming to the majors in May and can take over the setup role for now. But Clippard, at his best, adds another dimension to the Nationals' bullpen; his changeup makes him tough on lefties when he's keeping it down in the zone, and his deceptive delivery allows him to miss bats.

But neither of those things are there right now.

If the rest and resisting the urge to over-throw don't help, I'd highly encourage Tyler Clippard to ditch his current glasses and go with these badboys. Batters will be so stunned they won't know where to swing.