D.C. Talking Points: Any Fireworks Left For The Local Teams This Week?

Share All sharing options for: D.C. Talking Points: Any Fireworks Left For The Local Teams This Week?

Welcome to Talking Points, where each week I will run down the stories that made the biggest splashes in the blogosphere last week and will tell you what to keep an eye on for the week to come. It's been two weeks since our last talking points column since I was out on vacation last week. Luckily, most the teams in D.C. appear to be vacationing as well, including the Nationals with the way they've been playing lately. Last week was another slow one, so this column looks the be a short one. Lets get it started!

The only team in D.C. that is actually in the middle of a season is the Washington Nationals. Despite a sometimes exciting week with Strasmas again, a three home run game by Adam Dunn and another walk-off homer by Ryan Zimmerman, I am starting to wish the season would hurry up and end for these guys. Luckily the slow bleed into obscurity can pause for a little while this week with the MLB All-Star Game happening on Tuesday. From last Sunday to this morning, the Nationals went 3-4. Overall, not great and not making up any ground in the tough NL East either.

Currently the Nationals stand 13.5 games back in the East and things have gone from looking bleak to looking hopeless. Time to break up the Nationals people. The team is already losing, why not trade away Adam Dunn for some useful talent?

He's a free agent at the end of this season and he could easily re-sign here if the price was right. If, however, no one is offering anything worth Dunn's value and it looks like he won't resign, then certainly keep him and get the "Type A" free agent draft picks in return for someone else signing him next season.

Someone the team does have to trade right now is Matt Capps. Capps has to go immediately. Closers are one of the most overvalued luxuries in baseball and if a playoff bound team is looking to bolster its bullpen, then look no further than the Nationals' lone All-Star representative.

If you're worried about losing members of the already weak bullpen, I wouldn't. There will be plenty of arms ready to go into the bullpen once Jordan Zimmermann, Ross Detwiler, Chein-Ming Wang, Scott Olsen and Jason Marquis come back from their various injuries. I mean that right there is a decent starting five when healthy.

Why not put Craig Stammen, J. D. Martin and Luis Atilano into the bullpen and see if one of them can have a Tyler Clippard-esque career revelation? He was a starter once upon a time ago and the past two seasons he's been a heck of a reliever. Maybe lightning can strike twice.

Maybe we can find someone to take 30-year-old Nyjer Morgan off our hands and let Roger Bernadina and/or Jason Maxwell take over in the outfield. Neither one of them can hit worse than Morgan is hitting now and certainly their defense cannot be as miserable as Nyjer's has been this season. If I see another triple because of a misplayed ball ... arrgh!

In any case, moves must be made, now is the time to do it. Look at Seattle, they know they're out and they acted fast. The Nationals need to hurry up and do the same thing to salvage something from this season.

The team was getting ready for some Las Vegas NBA summer league action (they won their first game) and commenting on LeBron's decision to play for Miami last week. Not much else happened besides signing John Wall and Trevor Booker's rookie contracts but with the way the NBA structures rookie deals, that was merely a formality.

Finally, this just in, apparently that John Wall kid is pretty good.

Mike Williams is really hurt and wont be playing for the Redskins next season...possibly ever again. The rest of the team, I assume, just tried to enjoy what is left of the offseason and the time before Albert Haynesworth media mania strikes again. I mean, he is still on the players minds now. Imagine how bad it is going to be when camp opens. Man, i cannot wait.
Oh, and ex-Redskin Quinton Ganther got arrested for DUI. Good one, kid.

The team took care of some roster moves this week in resigning Eric Fehr and Jeff Schultz and waiving Michael Nylander. Also, Semyon Varmalov is staking claim to the goal right now with a jersey change ... not sure he should do that. Finally, the Caps are selling tickets like Jumbo Slices.

Ice Cube "It Was A Good Day" 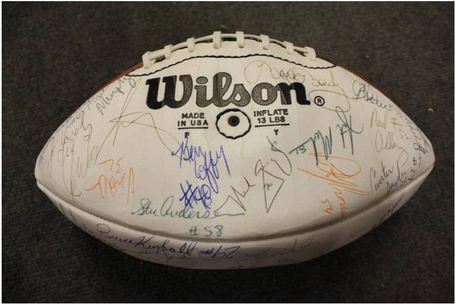 What you see right here is an autographed football. Who autographed it you say? Well how about at least 49 Washington Redskins players from the 1983, Super Bowl XVII team. That would be the greatest moment in Redskins history game with the world's famous "Riggo's Run" taking place. As a matter of fact, Riggo's signature is on the ball, so is Art Monk's, Jeff Bostic's, Mark Mosely's, Dexter Manley's and even Charles Mann's among others.

Impressive, no? You'd be foolish not to be impressed. So, you ask, how much is this ball going for on eBay right now? Well if you didn't bother to click on that link I will tell you. THE LOW LOW PRICE OF $50,000 or best offer.

How can you afford not to own this piece of Washington Redskins history? I don't think you can. Act now! SUCKERS!

As always, congratulations for making it this far down and feel free to drop me a line at bjpsbnationdc AT gmail DOT com to talk to me about whatever it is that is on your mind. I had a few emails last week about the song of the week. Good memories there from the Onyx. Hopefully Cube treats you well this Monday morning.

The dog days of summer are always a tough time for sports. Baseball is the only big game in town right now and while I love it, I yearn for more. The good news is that since the Fourth of July has passed, my preparation for the upcoming football season begins.

What that means for me is that I declare all my fantasy football keepers and I begin the slow process of researching and scouting players for the single best part of fantasy football. The draft.

Nothing in fantasy football is as much fun as the draft because, lets face it, unless your team is making it into the playoffs you aren't having any fun at all. It's such a grind to have to fill a competitive roster each week when your top five draft picks get hurt or suspended or hurt while suspended. It sucks and I sometimes resent having to do it, but I do because I drop like hundreds of dollars on this crap. The draft, however, is all about hope, how smart you think you are and copious amounts booze.

You can see why Jerry Jones is hootin' and hollerin' in the "war room" on NFL draft day. It's a fantastic feeling when you're sitting there with the ninth pick in the draft, just waiting and hoping that the guy in the eighth spot doesn't take the guy you've been targeting since your first mock draft on the Fourth of July. It's of course even more fantastic when you can celebrate it with a beverage of your choice, each and every round, until round 15 or so when you're finished ... possibly literally, but we don't advocate that here. I mean, you don't have to drink to have a good time, but why the hell wouldn't you, I say.

I would draft once a month if I could. I would be a stand-in for someone at their draft just for the fun of drafting again. I would crash someone else's draft party and bring my own beer just to make the obnoxious comments about who some people are drafting. There's a reason people fly out to Las Vegas to do their drafting with some elaborate packages out there to choose from It's really that much fun just to draft.

So, enjoy the dog days of summer. If you're like me, you will stay inside where the air conditioning is pumping hard, the soothing sounds of a baseball game is in the background on the television and behind the warm glow of your computer monitor lies the average draft rankings of RB's for your fantasy football scouting pleasure.

The draft is just around the corner ... get ready.