Which All-Star performances over the years stand out as the best from our favorite teams?

Far be it for me to always be creating controversy, but once again the whole issue of whether or not to include a member of a Baltimore team in one of my lists rears its ugly head. Why does it have to have an ugly head? Even among the select group of friends I float these ideas to, the discussion quickly turned to the question of whether or not any Baltimore teams should be eligible for any of the categories I intend to cover. (FYI ... I don't intend for this column to come to some terminal conclusion on this issue. It won't, and we won't).

To be fair, it has never occurred to me to include the Ravens. The Redskins are the football team in this area and the lines of loyalty are not only well-established, they run deep and strong. But the Orioles are a different story. This website is clearly a D.C.-based venture and is meant to encapsulate all the teams in the D.C. area. Baltimore is its own town and takes pride in considering itself independent of the "D.C. area." Yet I have already included the Orioles in a previous list, and it did not seem odd or wrong to do so. Let's not run from the debate.

I guess my point in all this is that while D.C. is in the title of the website, it is being read by "regional" sports fans. The recent past for each of us that takes rooting for our teams seriously has had some turbulence. No need to exacerbate things by simply lopping off part of what made this area so unique for so many years.

I grew up rooting for the Orioles, but I am a D.C. guy to be sure. The Redskins, Capitals and Bullets are my teams (I hate calling them the Wizards). Was I an Orioles fan simply because my town never had a team until I was almost 30 years old? Probably. But it is also true that I learned to love baseball by watching the Orioles. Listening to the O's on the radio, watching them on TV and hanging on every pitch for months on end each summer made me more than just a passing Baltimore fan. The fact that I attended college in Baltimore during the late '90s -- coinciding with Davey Johnson's masterful management of a few very exciting rosters -- only served to enhance my fandom.

It was there that I came to understand better the division between the two cities. While I attended college in Baltimore, I never quite understood why I consistently ended up on the receiving end of resentment and bitterness throughout the NFL season. I got that the Colts were stolen from the city. But their refusal to root for the Redskins while they prayed and waited for a team to come back to Baltimore manifested itself as an undeniable anger towards Redskins fans -- something I witnessed firsthand. It can be said that many D.C. baseball fans felt the same way when the nation's capital lost their baseball team so many years ago. By the time I left Baltimore to return to live in Washington, I was already psychologically distancing myself from the O's. The prospect of a team in D.C. was inching closer and closer and I had made my mind up to make the switch when it happened. It was a hard decision and one that not all of my friends joined me in making.

The fact that Peter Angelos seemed to go out of his way to stall our chances to get that team made it a little easier to move on, but there is no denying that for so many years, the O's were my team. At the end of the day, D.C. is my town though, and having a team here makes it my team. (I can already smell the comments on that one). I think it is kind of perfect that both franchises are ... uhhhhhh ... out of contention while all of this gets sorted out. When the Nats and O's square off in the Wolrd Series, it is going to be the greatest seven-game set we have ever seen.

As for the Ravens ... you can rest assured I have no immediate plans to include anything Ravens related in these columns -- aside from my investigative reporting segment uncovering the disturbing link between Baltimore and purple camouflage pants (low blow?).

As I watch the MLB All-Star Game, I am reminded of great moments in these exhibition-style affairs provided to us by players from our teams over the years.

The moment: Mariah Carey's tribute to Jordan where she wore the super tight Bulls jersey dress and then the super tight, full-length Wizards jersey dress. When the camera panned across the All-Stars in attendance, you could pretty much tell they were all in awe of it as well. Those curves in those dresses are burned in my brain forever. I was in attendance when Jordan dropped 53 against the Hornets as a Wizard. Yet his most memorable moment in his return for me was that Mariah tribute.

Here you go: your moment of dissent. But this was the first time a guy won both the Home Run Derby and the All-Star MVP award in the same year. Ripken was capable of hitting dingers, but his attack on that home run derby was awesome. Then when he followed it up with a 2-for-3 performance in the All-Star Game, including a three-run shot of Dennis Martinez, fans in this area forgot -- briefly -- that the the O's were well on their way to a sub-.500 season.

I know, I am bringing it on myself. But the dude had announced his retirement and was showing up for what everyone assumed would just be a tip-of-the-hat. Instead, we got two great moments. First, A-Rod pushed Cal over to short in the first inning so Ripken could man his natural position one last time in the All-Star Game. Then, on the first pitch he sees, he cranks it over the wall? Come on.

I simply can't believe many D.C. sports fans were hating on Cal or the O's that night. (I also recall extraordinary coverage by every D.C. sports outlet of that whole year ... far be it for me to go against that).

Nicknamed El Diablo, Etcheverry was the heart and soul of DC United from 1996-2003. He was the MVP of the MLS All-Star Game in 2002, scoring a goal for his side. The trademark hairdo, his unquestioned determination and his relationship with the fans of D.C. United make Etcheverry a player that deserves to be remembered among some of the best that played for any team in Washington. It was a unique sense of pride seeing this great player score on one of the biggest soccer stages in the U.S. 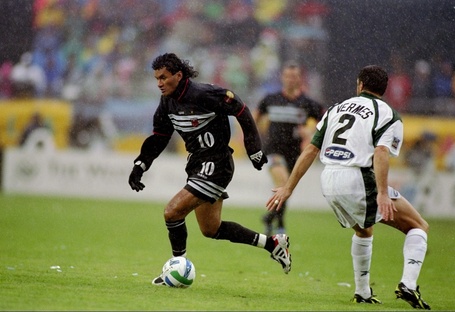 "The Hit" on punter Brian Moorman stands out mostly because the NFL Pro Bowl is not typically synonymous with punishing hits. When Moorman tucked the ball and went for the first down, he put his life in his hands. I always laugh when it is suggested that Sean Taylor did something wrong because he nailed a punter. That is among the dumbest things I have ever heard. Between the whistles, the defense is supposed to hit the guy with the ball. On top of that, the nature of the hit itself prevented any possibility that the ball-carrier would somehow end up in 1st down territory. This lasting image of No. 21 is sacred to us. Enjoy:

One last note: I will be attending the D.C. United game on Thursday night with my co-editor over at Hogs Haven (Kevin) and we will be engaging in a Penalty Kick contest at halftime with a few Redskins players. No Ravens players will be involved in any way whatsoever. Robert Henson, Jeremy Jarmon and Lendy Holmes will each attempt a PK on myself and Kevin. Terms of our side bets can be found over at Hogs Haven later today and tomorrow.