The Varsity News Summer interview series continues with new head coach Matt Griffis, who will take over a Broad Run team that hasn't lost a single game in the last two seasons.

The more observant members of our reading audience will notice the jacket coach Matt Griffis is wearing in the above picture says Stone Bridge on it, not Broad Run. I'm aware. I couldn't use a picture of coach Griffis adorned in Broad Run gear because, well, that kind of picture doesn't really exist yet. Matt Griffis has only been the head coach at Broad Run for about six months and will coach his first game there this fall.

We didn't ask coach Griffis to do an interview with us just because he is going to be a new head football coach (even though I'm sure that would be an interesting story to tell as well), it's the state of the program he is joining that makes his situation so unique.

There's turnover all the time in high school athletics; that isn't particularly new or unusual. But more often than not, when a team brings in a new coach, it's because the old coach failed to meet expectations or the team just isn't doing all that well. That's typically when a new coach is ushered in with the hopes that he can turn the team around and start a new winning tradition.

That is not the case at Broad Run. They don't need to be turned around because they have winning tradition in spades. Broad Run hasn't lost a single game in two years, and have back-to-back Virginia AA Division 4 titles to show for it. So it was obviously a little bit of a surprise when former head coach Mike Burnett left the school in January to take a job at the new Tuscarora school in Leesburg. This isn't your typical new coach reclamation project. Broad Run is already at the top; it's up to Matt Griffis to keep them there. No pressure or anything.

But with those expectations comes incredible opportunity. Very few coaches, if any, inherit a team that is not only capable of winning a state title, but has actually done so multiple times. Sure, he might have some big shoes to fill, but not a lot of coaches ever get to try on shoes that big.

No new head coach would have the same expectations or opportunity, and no defending state champion the same question mark. That's why we wanted to interview coach Griffis, and luckily for us he was good enough to oblige. So without further adieu, the latest Varsity News interview with the new coach at Broad Run, Matt Griffis.

SB NATION DC: You're coming into a Broad Run program that's used to a lot of success. Are you doing anything to try and keep some continuity with the former coaching staff?

MATT GRIFFIS: Coach Burnett and his staff did a great job of getting the Broad Run football program where it is. They put a great emphasis on the off season and they conduct workouts that focus on functional athletic strength and footwork. Jason Dawson who was on Coach Burnett’s staff has stayed on as the defensive coordinator. He was also in charge of the strength and conditioning program during Coach Burnett’s time at Broad Run; he is still responsible for this aspect of the football program. He has made the transition for me much easier.

We have changed the offense and the defense but the expectations for the athletes and the program have not changed.

SBNDC: What are you doing to put your own stamp on the program? Are you changing anything to really make this team yours?

GRIFFIS: I am not sure I am putting a "stamp" on the program. I am not looking for ways to make the program different but I am doing things the way I know how. I met with every athlete and parent that wanted to individually so I could get to know the player as a person and to get to know their parents. I think that let the players and parents know that I wanted to know them as individuals and that I had a very open door policy.

SBNDC: Do you ever have any apprehension to make changes in the program because it is your first year there?

GRIFFIS: No. If making a change is the best thing for the program I will make a change. I will not change things for the sake of change. 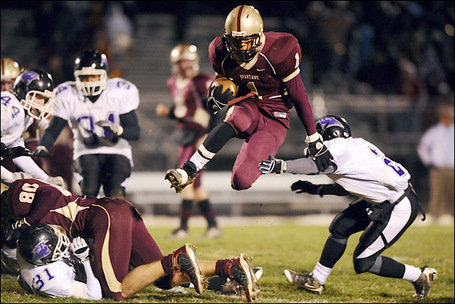 SBNDC: What do you think the expectations are in your first season?

I believe that many people expect the program to not reach the same levels of success because of the graduation of so many great athletes, two of which are going on to play Division I football.

SBNDC: It’s not easy to replace a coach who enjoyed such success. How have you been received by the football community at Broad Run?

GRIFFIS: The Broad Run community has been great. They made me feel very comfortable and at home right away. I think they know that I am excited to be at Broad Run and that I hope to be there for a very long time. 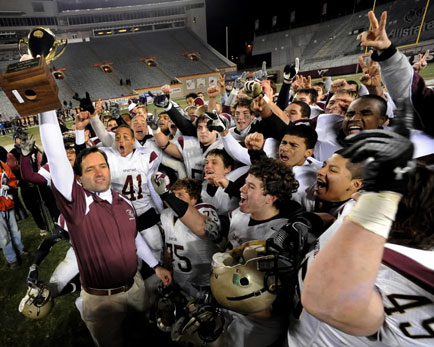 SBNDC: How do you plan on using your experience as an offensive coordinator to improve the Broad Run team?

GRIFFIS: The last few years Broad Run was fortunate to have a large offensive line and some very talented running backs. We will be different this year. We are not as big up front but our linemen have good feet. We will use the single wing and spread offenses. We have some talented quarterbacks and wide receivers returning. I believe the schemes we use will play to our strengths.

SBNDC: You plan on bringing the single wing offense to Broad Run. How long will it take to teach the team an entirely new offensive system?

GRIFFIS: It will take quite a while. The athletes will be starting from scratch. They will have to learn new vocabulary and schemes. When kids want to be successful they learn quickly. We will utilize the single wing series that best suit our strengths.

SBNDC: How has your 14 years under Mickey Thompson prepared you to be a head coach?

GRIFFIS: Coach Thompson taught me a great deal about Xs and Os but even more about handling coaches, players and a program. It starts with taking care of people and letting them know you care. Once you have created these relationships then success will follow. Coach Thompson allowed me to have certain responsibilities that helped me grow as a coach. Coach Thompson also taught me to follow your instincts and do what you believe is right. He has been very helpful since I got this job. 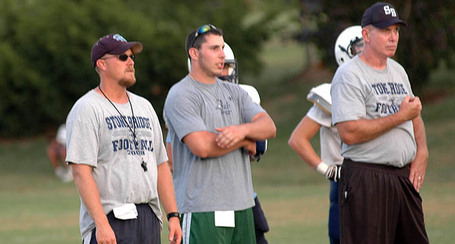 Is there any progress in the effort to have Stone Bridge and Broad Run play each other?

SBNDC: How hard will it be to coach against your old team?

GRIFFIS: It will be difficult. Coach Thompson is a very good friend of mine and all the coaches on the Stone Bridge staff are good friends too. It will also be difficult coaching against some of the young men that I coached. All of the 10 years that I worked at Stone Brige were great for me.

SBNDC: What does your team have to accomplish for this season to be considered a success?

GRIFFIS: This year will be a success if at the end of the season the young men on the team have great memories and feel that they were a part of something special.

Thanks again to coach Matt Griffis for lending us his answers and his time.