Share All sharing options for: The Hopeful: Navy Quarterback Ricky Dobbs' Case For The Heisman Trophy

The Heisman Trohpy watch list is usually populated by the best players on the biggest teams in the country, and this year will probably be no different. But every so often, someone without much fanfare from a relatively small school will force his way onto that list and demand serious Heisman consideration.

This year, that player is Navy quarterback Ricky Dobbs. 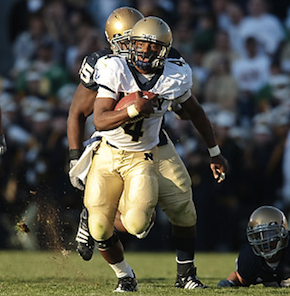 It's a little too early to call it a movement, but there is definite momentum growing in Dobbs’ Heisman candidacy, and for good reason too. As the leader of Navy's option-heavy offense, Dobbs had the most rushing touchdowns last year (27) of any player returning to play this year, despite missing almost two full games. The Heisman Trophy is basically the MVP of college football, and it's hard to argue that any player is more valuable to their team than Dobbs.

According to Patrick Stevens of D1scourse, Ricky Dobbs is one of 30 players on the preseason watch list for the Davey O'Brien award, which honors the top quarterback in college football. It's a good start, but Dobbs has to beat out all 29 other QB's on that list, as well as all the other non-quarterbacks with Heisman hopes, if he hopes to take home the trophy.

Fans of Navy football have been singing Dobbs' praises for years now, but now fans of other teams are starting to take notice as well. From Allen Keeney of Blatant Homerism:

Of all players returning for the 2010 season, you won't find one who was as instrumental in his team's success last year as Dobbs was for Navy.

So join me in support of Navy QB Ricky Dobbs as the people's candidate for college football's most prestigious award.

Blatant Homerism is a site that follows Oklahoma football, a team with players who are capable of taking the Heisman home themselves. As their title suggests, they are pretty biased in their coverage (not that there's anything wrong with that). It speaks volumes about the legitimacy of Dobbs' Heisman candidacy that a site so focused on a BCS Conference program is able to recognize his talents and impact on the game.

As of right now, the Naval Academy will not be creating a Dobbs for Heisman campaign, according to a team spokesperson, but that doesn't mean he won't be able to get national exposure. Navy is slated to play four games on national television, the first against Maryland at M&T Bank Stadium on Labor Day.

His most important game, or audition if you will, will be against Notre Dame in a game played at the New Giants Stadium in east Rutherford, NJ. Navy will be looking to beat the Irish for the second time in a row, after a 23-21 upset in South Bend last year. In that game Dobbs was able to rush for 102 yards and score a pair of touchdowns, despite missing the majority of the previous two games with knee issues.

Ricky Dobbs may not be the most well-known Heisman candidate in the country. In fact, he's probably the most anonymous. But that doesn't mean he doesn't deserve to be taken seriously as a candidate. The kid can flat out play, and if the Heisman truly honors the most important player in college football, then Ricky Dobbs has a chance.