One of the most frustrating things about watching a local team on a national broadcast is that the commentators don't grasp the importance some local players have to their fanbase. The truth is, Bryan Namoff's performance on the pitch has probably declined over the decade. But for a passionate fanbase like D.C. United's, players who stick around for several years become beloved in a way they are in few other places.

Unfortunately, ESPN2 missed all of that and talked as if nothing was going on while D.C. United fans were paying tribute to Namoff. I get it: it's a story that matters more locally than nationally. But for God's sake, at least acknowledge D.C. United's fans as they celebrate one of their favorite players of all time.

Anyway, rant over. Below the jump, a picture of the celebration (via @mathaim and D.C. Sports Bog) and a video of Namoff's D.C. United highlights. 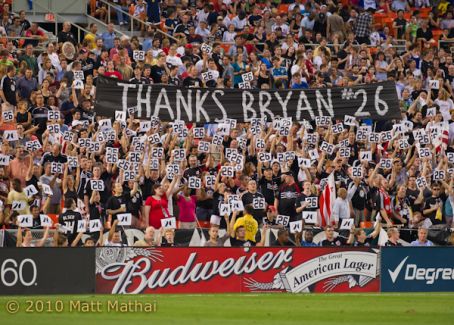