Share All sharing options for: D.C. Talking Points: Wall, Strasburg And Capps Are Full Of Win

Welcome to Talking Points, where each week I will run down the stories that made the biggest splashes in the blogosphere last week and will tell you what to keep an eye on for the week to come. Last week was another lazy summer week for the local sports teams. Only the Nationals, D.C. United and the Kastles were in town and playing. Not exactly the three most exciting teams in sports. Nevertheless, Talking Points will continue to recap the news you need to know and we'll get started right away with the ...

On All-Star break for half the week, everyone except for the mighty Matt Capps got a few days off. Capps was the Nationals' lone All-Star representative and he made the most of that distinction by getting the win for the National League team despite throwing just five pitches. That is efficiency right there. If only he could do that more for the Nationals instead of the adventures he occasionally puts the team through in the ninth inning.

After the break, a typical Nats week occurred. Stephen Strasburg pitched and the team won, when others pitched, the team didn't. The bats of the team must still have been on vacation because the Nationals got shut out twice in a row. Luckily the team will have a chance to break out of their slump in this upcoming series against the Reds.

Sadly though, what should we really expect from a team in the bottom five of runs scored? Imagine if Adam Dunn or Willingham actually get traded away from this team. Just think for a second about how miserable this team's offensive output would be then. Food for thought there, huh? I might be changing my stance on the need for a fire sale thinking about that.

If you didn't watch summer league, here's what he did. First of all, he won the four games he started at point guard for the Wizards. It's not just about the wins though, it's how he won those games (and yes, HE won those games. The team lost the only game he which didn't play). Wall had two double-doubles, lead the team in assists, threw JaVale McGee several awesome alley-oop dunks and made everyone's jaw drop with his speed and leadership abilities.

Sure everyone must remember that its just summer league. Even Ted Leonsis stated as much. However, it is a glimpse at the talent which will make him a star in this league. The Wizards have their own version of Stephen Strasburg now. Let's hope they can surround him with the talent he needs to succeed.

The Caps started and finished their development camp and if you want to see a multitude of links about what happened there, head over to Japers Rink because I cannot do it justice. To briefly sum it up, it was a nice event (except for this slash, boo to Braden Holtby) to see some of the young talent the Capitals have stockpiled over the years and a good way to get close to the fans.

It's going to continue to be a relatively quiet offseason for the team since general manager George McPhee has stated that his is done signing free agents.

Amazingly quiet for yet another week, the Redskins are heading into the stretch run of their off-season as training camp is right around the corner. Right now, Albert Haynesworth and Clinton Portis are looking slim, Donovan McNabb is going to have his own mini-camps in Phoenix ... and that's about all the "real" news we have this week. 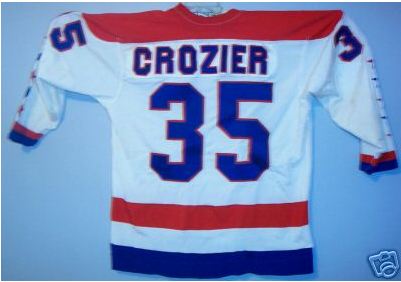 If I asked you which Washington Capitals game worn jersey would be going for the most money on eBay, surely this one would not be your first guess. This jersey belongs to the great goaltender Roger Crozier, who during the 1976-77 season played in all of three games for the Capitals. That's three games in his storied 14-year NHL career.

Yes Crozier was the Rookie of the Year in 1965 and the Stanley Cup Finals MVP in 1966, but those feats were accomplished in a Detroit uniform, not a Capitals uniform. He's not even in the Hall of Fame, but there is an award named after him for the goalie with the best save percentage throughout the season.

So, yes, impressive player, but most expensive Capitals jersey on the Interwebs? I just do not know how its possible. I know I'd pony up a lot more for a game worn Rod Langway jersey.

However, if you're a Washington Capitals fan and a Roger Crozier fan, well this item is your holy grail. Buy it now! SUCKERS!

Slow week is slow. I spent all of last week trying to adjust from being back from a vacation in Hawaii that my wife won us through a contest in Cosmo magazine. I know, tough life, right? Anyway, I need the Redskins season to start so I have more to write about than the Nationals sad slide into obscurity and random offseason tidbits. A guy can only take so much.

I will leave you with this rather lame story. Doodlebug's father (aka the dad of the third rapper in that Digable Planets video), taught me in a history course at my undergrad. It was African American history from the Civil War to the present, which at the time was like 1999 or 2000. No wonder that kid rap so good, he had one friggin' brilliant father. If only his dad could have spit some knowledge on the mic in class, I would've switched my major to history in a second.

That's about it folks. I spent four hours building a new desk for our office tonight, I am beyond tired and I'm not even sure if this makes much sense at this point. Office Depot's furniture is so much more complex than Ikea, it's like stepping up from Legos to Construx. Whole new level. See you next week.