On Antwaan Randle El And The Redskins' Meddling Owner

Whenever something goes wrong with the burgundy and gold, Redskins owner Daniel Snyder always makes for an easy target. This time around though, there's plenty of blame for everyone.

Share All sharing options for: On Antwaan Randle El And The Redskins' Meddling Owner

Former Washington Redskins receiver (and current disappointment) Antwaan Randle El is in the news this week after making critical comments about his former organization.

According to Randle El – and stop me if you’ve heard this one before – the recent failures of the Redskins can be traced to one man: owner Daniel Snyder.

"When Jim Zorn was there, he was hands-on," said Randle El of The Danny. "He had great potential, but Dan Snyder was too involved because he didn't trust coach Zorn as much as he did coach (Joe) Gibbs, and those were things that prevented us from success as a team."

Let me start by saying that I am by no means a Daniel Snyder apologist. After all, my ideal scenario for the 2010 season involves disgruntled tackle Albert Haynesworth being paid to ride the bench in an effort to teach "Fat Albert" a little humility while teaching the owner an equally valuable lesson about the dangers of frivolous spending.

But I find interesting, to say the least, that Randle El would feel compelled to make these remarks. 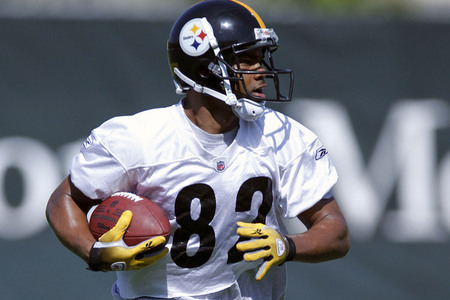 For starters, he’s now a member of the Pittsburgh Steelers. He’s returned to the first franchise he ever knew and the team he won a Super Bowl ring with. So why dredge up the past? Isn’t there more to do in Pennsylvania than take shots at Snyder?

Maybe Randle El could go bar hopping with Ben Roethlisberger or send a thank you note to Santonio Holmes’ substance abuse issues that created an opening for his return to Pittsburgh. Any of that would appear to be a more constructive way to spend his days than slamming the man who signed off on his seven-year, $31 million contract back in 2006.

After all, it’s not every day that a receiver coming off an absolutely mediocre season (35 catches, 558 yards and one touchdown) takes home that kind of cash. But whatever. That’s his business.

Aside from the timing, the most surprising aspect is that Randle El was available for comment. During his four years in Washington, Randle El was routinely one of the first guys out of the locker room following a game. Don’t believe me? Ask around.

Sure, he’d happily appear on a pre-recorded segment hosted by Larry Michael or some other team employee, but it was always a safe bet that Randle El would be long gone by the time the media was allowed in the locker room (roughly 10 minutes after the game ended).

I never took it personally; I just figured he was staying consistent. Randle El rarely showed up during games, so why would he be any different in the postgame locker room? I mean, we’re talking about a guy who, rumor has it, when the Redskins gave him his pink slip this past offseason, responded by signaling for a fair catch.

What exactly should we expect him to say? 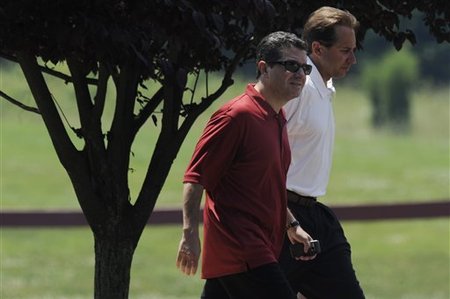 But enough about the messenger. Let’s tackle his message.

In Randle El’s opinion, the primary reason the Redskins won just 12 out of 32 games over the last two seasons is because the owner set the head coach up for failure. Snyder didn’t trust Zorn, and his meddling prevented the ‘Skins from any possible success.

To anyone familiar with the Jim Zorn Era, Randle El’s comments would appear to target the decision to strip Zorn of his play-calling duties in favor of bringing in Sherman Lewis, the retired bingo caller.

Since it’s been a while, let me give you a quick refresher on how grim things got last season:

Over the first seven games, the Redskins offense scored an average of just 13.7 points per game. They averaged 296 total net yards per game, with 93.5 yards coming in the running game and 202.5 yards from the passing game. The ‘Skins offense converted just 25 of 86 third downs (29 percent) and scored on eight of 18 red-zone chances (44 percent).

That’s what Zorn brought to the table.

Now, here’s where the Redskins finished the season:

Even with the substandard start, a retiree was able to walk in the door and improve the offense across the board. You can question the way it went down, but there’s no logical way to question the results. No matter how you spin it, the Redskins offense performed better against stronger competition once Zorn was no longer calling the shots. It might hurt to hear it, but it’s the truth. 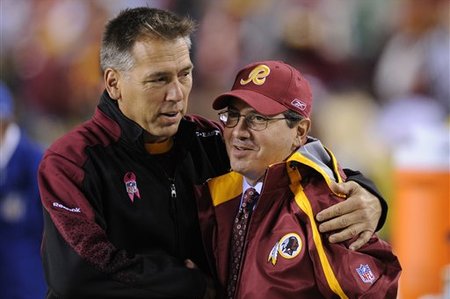 And here’s another truth – more than a few Redskins players have opened up to me about Zorn since his departure. To a man, every player I’ve talked with has said the same thing.

They all say Jim Zorn was a good man. He was someone they respected away from the game and many of them enjoyed having long conversations with him about life in general because he always had a good perspective.

But each of those players eventually finished their thoughts with the same thing – Zorn was in over his head as a head coach. He didn’t have the experience necessary to handle everything being thrown at him and his locker room lost confidence in him. When that happens, changes have to happen.

"You go back to training camp year two of Zorn, and all of us we were excited," Cooley said. "We said this was gonna be our year, we had all this time to work together, put this offense together, and it was worse from Game 1 than it had ever been the year before. And I think by the time we lost to the Lions, he lost the locker room. And I liked him, I thought he was a great guy, it's just guys were frustrated. Guys in the locker room were frustrated about what we were doing, how we were playing. And I think at that point, a lot of people knew there was gonna be a change made."

At the end of the day, Jim Zorn was relieved of his duties as a head coach because he wasn’t good enough to get the job done. Shortly after his release, Zorn landed with the Baltimore Ravens as their quarterbacks coach. It’s the perfect job for him because it’s what he did prior to taking over the "maroon and black," and it’s the role he’s best suited. He’s moved on and so have the Redskins, who have the locals legitimately excited after upgrading the three most important positions in football, going from Vinny Cerrato/Jim Zorn/Jason Campbell to Bruce Allen/Mike Shanahan/Donovan McNabb.

Even with a "meddling" owner, the Redskins seem to have finally gotten on the right track. For the first time in recent memory, there’s a legitimate reason for cautious optimism in our nation’s capital.

So really, if Randle El could spend a little more time focusing on his current employer and a little less time pointing fingers about why he couldn’t get the job done in D.C., it’d probably be for the best for everyone involved. 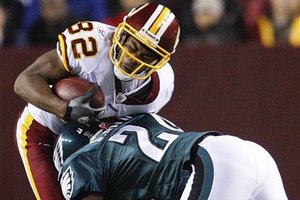