Share All sharing options for: Lighting Among The Many Changes Ted Leonsis Has In Store For The Wizards

During a radio interview with Holden Kushner, Ted Leonsis said that among other things, the Wizards will change the lighting during games to emulate Madison Square Garden and the Staples Center. What this means is that the floor will be the only area well lit, while the fans not seated court side will be sitting in relative darkness. 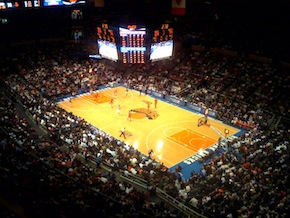 It makes the court seem more like a stage, and the fans like the audience at a play. It seems like a small change, but if you've ever been to a game at either of those two arenas, than you know that it makes a big difference in how you view the game. Madison Square Garden is the most famous basketball arena in the world. Anything the Wizards can do to mirror the experience of seeing a game there at the Verizon Center has to be considered a big improvement.