The newest Madden NFL video game is almost here, and with it comes a new rating that is causing a bit of a stir. In addition to the traditional speed, strength, agility, etc. ratings that Madden aficionados know, Madden '11 will rank players based on their "swagger." How they evaluate a player's swagger, and what it means in terms of on field performance, is anyone's guess.

The individual player ratings have been released, and can be found here. There are a lot of bones to pick with the Redskins' ratings (Andre Carter at 76 overall? Mike Sellers at only 78 strength? Have you seen that man?), but we're going to focus on swagger because, frankly, we're excited to see what exactly it means. Analysis and observations after the jump.

-Malcolm Kelly only has a swagger of 55? Maybe we aren't talking about the same Malcolm Kelly, becuase this is the one I know:

Maybe he only got a 55 because he rhymed "summer time" with "make our time." I mean, that is kind of bush league. (if you're reading this Roger Goodell, please ignore the codeine reference he makes around the :45 mark)

-What gives Rocky McIntosh a swag-tastic 85, while fellow linebacker London Fletcher (who is rated as a far superior player) only registered at 55? That's right, Rocky went to the U, i forgot. That has to be at least a 30 point swagger bump.

-On the flip side, Maake Kemoeatu and Casey Rabach only registered a 21 on the swag scale. I can't imagine they would be happy to see that, but based on the stats, they probably don't have enough confidence to say anything about it.

-Finally, Colt Brennan's swagger is an 83. So I guess that means that this whole thing is just a big joke, right? 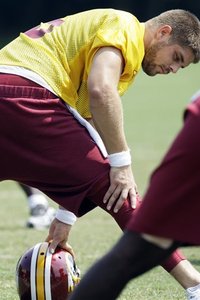