In case you didn't know already, D.C. United's 17-year old phenom Andy Najar is a native of Honduras. It's hard to remember this because he came up through D.C. United's youth academy and has been such a huge soccer story locally in the nation's capital. He's also been in this country for several years, so it's not like he was an international star anywhere else.

But regardless, he is still a native of Honduras, and despite his association with U.S. Soccer youth development, Najar has pledged he will play for Honduras in any international competitions. So in a sense, there's really not much for Hondurans to worry about. Najar is still the future of their soccer program, even if he plays in the U.S.

Nevertheless, one Honduran newspaper ad expresses ... shall we say, concern ... that Najar will renounce his Honduran affiliation. The picture, via Craig Stouffer of the Washington Examiner, is below the jump. 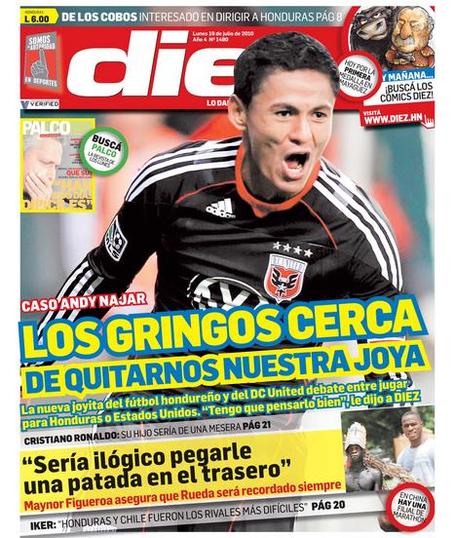 The translation of the headline, according to Stouffer, is "The Gringos are near to taking away our gem." "Gringos," in case you didn't know, is a slang word in Spanish and Portugeese that means "foreigners."

Alright, fine, Hondurans. You can have him. But at least let us in D.C. enjoy him playing for our club team.