Past Perspectives: The Wizards May Finally Have A True Rival

The Redskins have the Cowboys, the Capitals have the Penguins, Maryland has Duke and Georgetown has Villanova and Syracuse, but for years the Wizards have gone without a true rival. Now, thanks to John Wall, and a little bit of free agent reshuffling, Wizards fans finally have a team they can love to hate.

Share All sharing options for: Past Perspectives: The Wizards May Finally Have A True Rival

Rivalries are what turn casual fans into die-hards. Without a common enemy to root against, it's difficult for a fan base to truly come together.

Rivalries are what keep fans coming to watch their teams, even when times are tough. The opportunity to defeat a rival in the closing weeks, even after a team has long been eliminated from playoff contention, can be enough to get the bad taste out of one's mouth from a disappointing season.

Would the Redskins continue to sell out FedEx Field year after many disappointing years if the Cowboys, Giants and Eagles weren't around to stir up trouble? If the Penguins weren't around to serve as the Capitals' measuring stick, would we Rock the Red as much? Does "Fear The Turtle" become the rallying cry of an entire state if Duke isn't around to boil blood of every Maryland fan? If there was no Villanova, would Georgetown fans have as much to blog about?

The answer is no, and it goes a long way in explaining why the Wizards' fan base lacks the same passion that the teams I listed in the previous paragraph share. Washington basketball fans haven't had a rival to root against since the Bullets-Knicks rivalry died down in the late '70s.

For a few years, Wizards fans tried their best to turn the Cavaliers into a rival, but it was never meant to be. As hard as they tried, the Wizards were never meant to be anything more than an annoying roadblock on LeBron's path of destruction. With some separation from the heated days of that mini-rivalry, I think most of us can now admit that Cavs vs. Wiz was less about finding a team to hate as it was about clinging to a rare moment of relevance.

But alas, from the ashes of a failed rivalry, a new opportunity for a true rivalry has been born. Thanks to what has transpired over the past few weeks and months, I really believe that a rivalry with the Miami Heat has potentially been born. 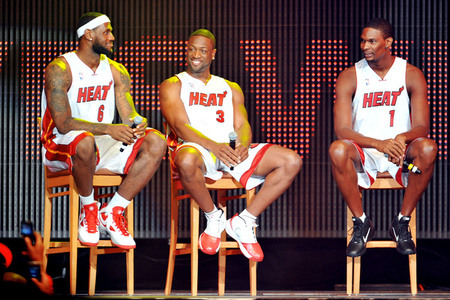 Now, I'm completely aware that declaring the Heat as a rival isn't a groundbreaking statement. The Heat will be circled on every team's calendar for the foreseeable future. But the Wizards have the pieces in place to turn Miami vs. Washington into a truly special long-term rivalry.

1. Wizards fans have a five-year head start on everyone who now hate LeBron.

Just because the Wizards-Cavaliers rivalry never panned out doesn't mean that all of LeBron's past transgressions are suddenly forgiven. We still remember the travel, the whining, the whole bringing Jay-Z to the District so he could mock DeShawn Stevenson in a rap song saga, the pompous attitude and, most importantly, the crab-dribble. Those bitter memories won't disappear as quickly as LeBron's mural disappeared from downtown Cleveland.

In fact, now that LeBron has confirmed everything Wizards fans felt about him through this free agency circus, those feelings have cemented in everyone's hearts and minds. With the exception of Cleveland, for obvious reasons, LeBron won't face a more hostile environment anywhere in the NBA than what he'll face every year in D.C.

2. The real thorn in Washington's side: Dwyane Wade.

LeBron is the Wizards' most well-known antagonist, but he's far from the most effective. In his career, LeBron is a mere 12-12 against the Wizards, with a 12-4 record in the playoffs. Though he has the upper hand on the Wizards, he doesn't slice and dice the Wizards like Dwyane Wade does.

It would be one thing if Kobe Bryant was wreaking this sort of havoc on the Wizards twice a year, but Dwyane Wade plays in the same division, which makes the pain inflicted that much more damaging. Speaking of division rivalries ...

3. Being in the same division with the Heat will increase the intensity of this rivalry.

Since conferences were realigned in 2004, the Wizards have been a bit out of place. Three of the teams in the Southeast are less than 25 years old and the Wizards never had much of a rivalry with the Hawks, so there hasn't been much to get excited about when the Wizards have faced their divisional foes.

Now, things are starting to change. We all know that Miami and Orlando will be in contention for a title next season. Atlanta, though flawed, will still be among the best in the Eastern Conference. And Charlotte is improving, piece by piece. That makes for quite a competitive division, which you couldn't really say about the Southeast until now.

Division titles might not mean as much in the NBA as other sports, but having the Heat as a divisional rival will add some extra drama to what could be an already dramatic rivalry.

4. The Wizards will be strong where the Heat are weak, and vice-versa.

Rivalries are no fun when both teams are constructed the same way. Clashes in style, personnel and franchise philosophies are what make rivalries compelling.

The Heat will dominate at shooting guard, small forward and power forward, but with John Wall, Andray Blatche and JaVale McGee, the Wizards have the potential to give Miami fits at point guard and center down the road. While the Heat will likely keep games relatively slow paced (both the Heat and Cavaliers finished in the bottom third of the NBA in pace last season) Wall will be pushing the pedal to the metal at every opportunity for the Wizards. The Wizards are building through savvy draft picks and young talent, the Heat built up through grabbing the best free agents available.

The Wizards and Heat couldn't be more diametrically opposed to one another if they tried. The Heat are the juggernaut out to destroy everything in their path on the way to a level of domination the NBA hasn't seen in years. The Wizards are out to build a champion in the purest, most natural way possible, stocking up  on young talent and slowly maturing into a squad that can take down anyone. Though it will take some time for the Wizards to reach Miami's level, the journey will only make the rivalry better as the Wizards become a bigger threat to the Heat with every meeting.