My name is Jordan Ruby and I've been living in the DMV for five years and covering high school sports in the area for four years. Varsity News is a weekly feature that reviews all the best local action in a single place, bullet pointed for easy digestion.

Heading into the 2009 season, Good Counsel had reached the last five Washington Catholic Athletic Conference championship games, only to lose to DeMatha each time. In fact, over that time, the majority of Good Counsel's losses, both in regular season and playoffs, had come at the hands of the Stags. They beat up on everybody else in the league, but they just couldn't overcome the juggernaut from Hyattsville.

So when Good Counsel faced DeMatha during the regular season in early October of 2009, they wanted to show everybody (including themselves) that they could beat them. They got off to a great start, leading 21-3 after three quarters, only to see DeMatha rattle off 21 straight points in the fourth. What was shaping up to be a statement win ended up being a potentially demoralizing loss.

After a game like that, any team needs the influence of a great coach like Milloy more than ever. Moving forward, Good Counsel didn't lose any confidence and showed no ill effects from the heartbreaking loss. They bulldozed through the rest of league play and through the playoffs, only to meet the same familiar foe in the championship game.

The game started the same way some championship games had in the past. Good Counsel sported a slim 14-7 lead, but as DeMatha marched towards the end zone near the end of the game, an air of sickening familiarity must have overcome the Good Counsel staff and their fans.

But this time, things were different. A sack on fourth down with :50 seconds left sealed the win for the Falcons, and gave Coach Milloy the WCAC championship he had been waiting nine years for.

Even harder than winning that first title will be defending it, especially against a DeMatha team with a bad taste in its mouth. Coach Milloy took a break from his summer football camps to be a part of the Varsity News Summer Interview Series: 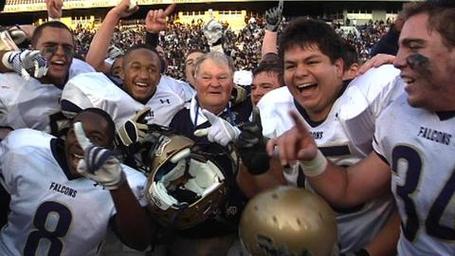 SB NATION D.C.: Let's start with that big win against DeMatha in the WCAC final last year. What did that mean for your program?

BOB MILLOY: It means a lot, [because], you know, we had lost to them five years in a row in the championship game. Matter of fact, it's the first football championship in the history of our school in 51 years. It's the first time we won the catholic league championship, so it was a pretty big deal.

SBNDC: That win was nine years in the making. Where does it rank among the great moments in your career?

MILLOY: It's right up there. I don't like to compare teams and I certainly [don't like to] compare players. But the fact that it was so frustrating to lose five years in a row - and we beat them three of those years in the regular season, but couldn't win the Championship game - it was very, very fulfilling. I guess that's a good way to put it. It was good to get over that hump and hopefully we can keep it going.

SBNDC: DeMatha had won the last six league championships and beat you 24-21 in the regular season. Where was your confidence level heading into that game?

MILLOY: We go into every game thinking we can win. You go into DeMatha though, and obviously it's not your everyday run of the mill school. Those guys have been winning for 40 years. They probably feel the same way. It's not one of those deals that you go and bet the house on, but we go into every game feeling like we have a chance to win. It doesn't always work out that way, but we have our kids believeing that, that's for sure.

SBNDC: You enjoyed so much success before you got to Good Counsel. Was it hard to go without a title for nine years?

MILLOY: No question it was probably the hardest one of all the championships I've won, because DeMatha is such a formidable opponent. It was very, very difficult.

SBNDC: What are your expectations for the coming season. Is it championship or bust?

MILLOY: I don't do it that way. We're going to take it one game at a time. Our first game is against St. Xavier on National TV. We're going to put everything we have into that, and when that's over we're going to worry about Gilman. That's another kind of semi-national interest game. Then, we got State College (in Pennsylvania). Obviously, we want to win a championship, we want to win our league, do this, do that, but we just take it one game at a time. You can't worry about the DeMatha game at Navy when you got St. Xavier waiting for you. It doesn't work that way. 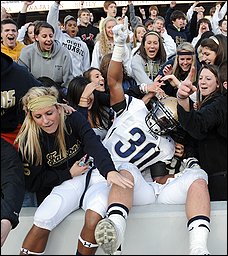 SBNDC: There was an issue with your quarterback Zach Dancel going to a camp run by DeMatha Offensive Coordinator Chris Baucia. What did that mean for Zach?

MILLOY: It wasn't an issue on our end. Baucia is a good coach. He's had this quarterback academy for many years, and I've had several kids over the years to go to the academy and in the offseason to work on fundamentals.  But DeMatha decided he would no longer be allowed to coach any kids they played against. That was all DeMatha's call. We had nothing to do with that.

SBNDC: Does that affect your rivalry with DeMatha at all?

MILLOY: Not in my way of thinking. It certainly is not going to make me work any less hard. Zach has found another quarterback mentor that works with him. A day, a week, or so, just on his footwork and his throwing. But he enjoyed working with coach, and I think he was disappointed.

SBNDC: What are you trying to improve on for next year?

MILLOY: We have to replace three of our defensive backs, and all of them are going to (play in) college. And we lost a linebacker and a D-lineman. We lost about seven guys on defense, so we're going to have to find replacements for them. Last year, I thought the defense was the heart of the team, and the offense had a lot of young guys on it. So our big thing is to get that secondary squared away. That's going to be the biggest thing. 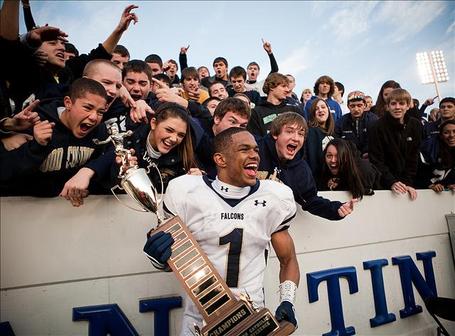 SBNDC: What will this team have to do to be successful?

MILLOY: Well it's the same old story. We've got an extremely difficult schedule, starting with St. Xavier. Then, we play Gilman, then City College in Pennsylvania. That's three great football programs. Then, you still have to deal with the St. John's, Gonzaga, McNamara and DeMatha. But it's the same old thing. DeMatha is always going to be there waiting for you. I don't think it's possible to be physically better than DeMatha, ever. But if we can close to it, then we got a chance.

Thanks again to coach Milloy for his answers and his time.