If You Were Alex Ovechkin, You'd Play Offseason Hockey Too

Share All sharing options for: If You Were Alex Ovechkin, You'd Play Offseason Hockey Too

It's been a little while since we last saw Alex Ovechkin. I bet you're curious about what he's been up to. How's your Russian? 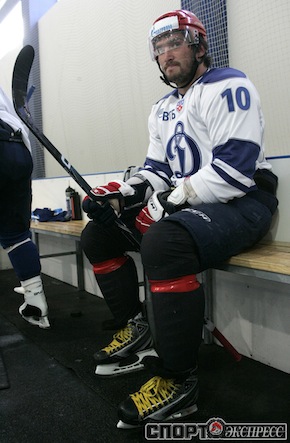 Nothing? Me neither. Maybe not a total translation, but at the very least an explanation, after the jump.

Our pals over at Japer's Rink brought this set of pictures to our attention and explain what Ovie is doing back on the ice so soon in an unfamiliar jersey no less.

He's working at his new job in Moscow today, suiting up for Dynamo, and hosting a Master Class for tomorrow's NHL and KHL future stars.

Basically, Ovechkin has been a counselor at a hockey camp run by the team he used to play for (take my word for it, that says Ovechkin on the back of that jersey) in Russia before he joined the Capitals. I'm guessing they called it a master class because Ovechkin needs a more bad ass title than camp counselor. Leader of a master class sounds more up his alley.

As for the picture, it's good to see Ovechkin still sports that familiar on-ice perma-scowl in the middle of the offseason. Maybe he's still mad about how the season shook out and he's taking it out on some youngsters in Russia. Yeah, that totally sounds like something he would do.